Why Guns Blow Up Part I | Reasons for Gun Explosions

Since the inception of guns in the 13th or 14th century, guns have been exploding. In the early days, it was the metal technology that was at fault. They were made from brass or wrought iron and just wouldn’t stand up to shooting, even with the weaker black powders of the period. The powder of that period was weaker, not having much saltpeter and it was finer than it is now. Granulations weren’t used then. The cannons were so dangerous that prisoners were used to fire them and if they survived, they were given a pardon, according to an article I read some time back. Of course, when iron and later steel use was perfected, that pretty much solved that problem. Better welding and loading techniques, without a doubt, also helped. 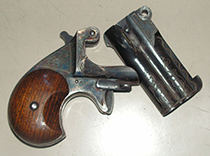 In the early years of smokeless powder, people didn’t understand the properties of it and loaded it the same as they would black powder. In other words, fill the case and seat the bullet. Of course, that would destroy most guns in short order. Once the word got out, that problem went away. Another problem was that primers had fulminate of mercury. When fired, the mercury would attack the case, weakening it over a period of time. If it was reloaded, it could cause a case to shatter, possibly causing a gun explosion. In fact, if the cases sat around for a while before loading, they could shatter in the die. In the scheme of things, that would be better than shattering in a rifle.  Black powder loads covered up the problem because they had lower pressure and the cases were washed between loadings on some occasions, which would dilute the priming mixture. Some older 38 and 357 Magnum cases had large pistol primers, which are still occasionally encountered. If you load a max load in cases using small pistol primered cases, the powder may over ignite in a large primered case causing a serious problem. I have observed both small and large primer pockets in the 400 Cor Bon, which should make you pay attention to such details. Why that was done is a mystery to me, as you have to have two sets of loads for the same caliber unless you stick to one size of primer. Recently, some 45 auto cases have come out with small pistol primers so you might want to be on the lookout for those. Recently, I conducted a comprehensive test comparing small and large primers in 45 auto cases. Believe me when I say that the difference depends alot on the loads and powder types used. Since many handguns use only a small amount of powder, a grain or two can and will make a difference. Starline makes cases for blanks with oversize flash holes for the 45 Colt and the 5 in 1. It allows more flame to go through the flash hole properly igniting the black powder. As long as black powder is used, there is no problem. However, if a heavy load of smokeless powder is used, a blown up gun can be the result. They are clearly marked as blanks on the case head, so pay attention when loading your brass. You can look at the flash holes and see the difference. There are a few brave and foolish folks who drill out the flash holes with the belief that you will have better info. Don’t!!  Professionals who use sophisticated equipment to establish the specs set the flash holes and changing them can be dangerous.

One of the early problems was in heat treating the receivers, as the process wasn’t understood as well years ago. One outstanding example was the older model Springfields. They were improperly heat treated causing them be have brittle receivers. Ser #’s 800,000 and below from the Springfield Armory and ser# 258,805 from the Rock Island Armory were involved. If you encounter one, it’s best not to shoot it. They are still around waiting to cause a problem, so if in doubt, have it checked. I encountered one about two years ago that someone showed me. An amateur gunsmith drilled the receiver for a scope mount and it cracked. They proceeded with the operation anyway ignoring the danger signs. Why they didn’t blow their head off is a mystery. Perhaps, God does look out for fools.  Anyway, at the request of the owner, I deactivated it. Serious injury is a real possibility with shooting such a gun. Improperly heat treated receivers will frequently come off in pieces with quite a bit of velocity. They tend to shatter like glass spraying shrapnel everywhere. Keep in mind that military rifle ammo from that period operated from 40 to 50,000 PSI and it is only a few inches from your face.  For a very good, detailed activity of such gun explosions, see Hatcher's Notebook. 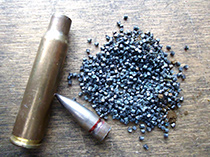 Many years ago, the US military put a tin coating on their bullets to reduce fouling and increase accuracy. While that worked, it was found that the bullet cold soldered to the case neck, increasing the power it took to get the bullet out. That, along with the grease they used, caused some gun explosions and both practices were discontinued around 1920 or so. I have found some military bullets extremely difficult to pull, but in most cases, if they were seated a bit deeper, breaking the seal, that would solve the problem. I believe that if they were fired the pressure would be higher than normal. I strongly recommend against gluing a bullet in the case under any circumstances. Any old military ammo should be treated as dangerous ammo because it frequently is. As powder ages, it changes burning characteristics, sometimes becoming stronger. In addition, hangfires are a real problem with any older ammo. Usually, a hangfire will go off from 3 to 5 seconds after pulling the trigger. If you fire any ammo, keep the muzzle pointed down range for 60 seconds before opening up the action. If you start to open up the bolt and the round goes off, you will be lit up. I have encountered that situation on several occasions with hangfires. I pull the bullets to shoot later and toss the rest, as the powder is bad. They usually take an odd sized Berdan primer. More often than not, the brass isn’t all that good either. I have seen a lot of old unfired ammo with split necks.

Another cause of gun explosions is firing a gun with the wrong cartridge. A good example is shooting the 8 X 57 in the 30-06. The 8 X 57 is short enough to chamber, but upon firing it, you are doing two bad things. First, shooting an 8 mm bullet down a 30-caliber barrel is a very bad idea and since the case is shorter, the head won’t be properly supported. If it doesn’t actually blow up the gun, it will destroy the magazine and stock because the gases have to go somewhere. If you fire a 30-30 in a 303 Savage, the results can also be disastrous. The 30-30 case is .02 smaller at the critical head area, allowing it to rupture, spraying gas all over. There are other possibilities such as firing a 358 Winchester in a 270 or 30-06. That’s why it’s important to make sure that you are firing the proper ammo. If you make 7.7 Japs out of 30-06 cases, make sure that they aren’t fired in a 30-06 or 270. In fact, any time you form cases from others, make sure they are properly separated and labeled. The old 8 mm fired a .318 diameter bullet until about 1904. Shooting the newer .323 diameter bullet can be dangerous, especially in the Commission rifle. Factory 8 mm ammo made in the U.S. is pretty weak and is probably safe to shoot in the older guns, but I don’t recommend it. As well as being dangerous, it probably isn’t very accurate. I have found that a 9 X 19 Luger round will chamber in a 30 caliber Broomhandle and possibly other similar weapons. Shooting this combination would be extremely disastrous. Shooting a 3” shell in a 2 & ¾” chamber can occasionally cause a gun to blow up. The shot and wad will be constricted for an instant, causing an incident. At the very least, it will kick harder than normal, giving you a clue that something is afoot. I have a 20 gauge double barrel that that happened to. Shotguns have thinner steel and are more subject togun explosions than thicker barreled rifles. Also, cheaper gun barrels aren’t heat treated as well as the better ones. Another possibility is shooting a 357 magnum cartridge in a 38 special revolver. Most of the time, the 357 won’t chamber in a 38, but don’t count on it, especially in a cheap gun. The 357 is loaded to much higher pressure than a typical 38, which can wreck a revolver. Winchester came out with the 375 Winchester round some years ago. While a good woods round, it will chamber in the older 38-55 rifles. Some of them are designed for black powder, which make shooting the newer round a dangerous proposition.

If you form cases, sometimes it’s necessary to neck them down from a large to small caliber. The neck will thicken during this procedure, causing a constriction. Sometimes, I make 219 Zipper cases from 30-30’s. I first neck them down in a 25-35 die, which is necessary. I then inside ream the necks and trim to proper length, and then size in the 219 die. If I didn’t ream the necks, a noticeable bulge would appear in the loaded 219. Not only would they be very difficult to chamber, but they would be hazardous to shoot, due to the excessively thick necks. When fired, the bullet will get stuck for a millisecond causing the gun to blow up. To prevent that, either ream out the neck or outside turn it, to allow the bullet to exit in a normal way. I can remember, years back, the American Rifleman had an article about a 243 doing exactly that. They determined that excess neck thickness caused the rifle to blow up.

Various barrel obstructions can blow up a barrel, though seldom ruin an action. If you have a shotgun and a wad gets stuck in the barrel, firing it can cause a serious injury. Since the barrel is thin, the shot and powder residue will frequently come out the sides. Since your arm is in the area, it will catch the shrapnel. If you fall while hunting, make sure there is no mud or snow left in the barrel. I have a barrel that a fellow who tripped and fell while he was duck hunting. About 4” of the barrel went into the water and the gun went off. He now has a slug barrel with no choke. I have seen a slug shot down a real tight choke, blow out the choke, giving it wings. A rifle or revolver barrel will generally bulge if you attempt to shoot out an obstruction. I did see one revolver blow out a piece of the cylinder where the notches are when it was fired with a bullet in the barrel. The barrel had a noticeable bulge in it about half way down. Sometimes, a 20 gauge shell can accidentally be put in a 12 gauge. It will drop about 3 to 4” down the barrel. If a 12 gauge is fired in it, the barrel will blow off, usually causing serious injury to the shooter and bystanders. A 16 gauge in a 10 gauge can cause the same problem. Just make sure that you segregate your shells if you have such guns.