In 1871 the U.S. Army bought 1,000 of S&W’s brand new No.3 revolvers chambered for a round that was first called only .44/100. It used a heel-base type of bullet; meaning there was a reduced diameter shank to fit inside the cartridge case. The full diameter of the bullet was the same as the outside diameter of the cartridge case. (Envision a .22 LR round.)  At this dawn of metallic revolver cartridges most if not all American designed ones were based on the heel-base bullet concept.

History of the S&W 44 Russian

Russia’s military attaché to their U.S. embassy, General Gorloff, encountered the new 44 S&W revolvers and was impressed but not so much with the .44/100 cartridge. The Russian Government offered Smith & Wesson an order for 20,000 revolvers but only if they were chambered for a .44 caliber cartridge of their own design. Naturally Smith & Wesson agreed. What the Russians wanted was a round whose bullet diameter fit inside the cartridge case.

Early .44 Russian factory loads used 275 grain outside lubed bullets over 23 grains of black powder. About 1888 most factory loads had become loaded with inside lubricated bullets of 246 grains over the same powder charge. However, as early as 1899 Winchester Repeating Arms was loading .44 Russian ammunition with smokeless propellant under 255 grain, round nose, inside lubed bullets.

The Russian Government bought Smith & Wesson .44 Russian revolvers totaling over 100,000 in the 1870s and thousands more went to the Turkish army and even the Japanese Navy. In his book SHOTS FIRED IN ANGER author John George writes that he encountered S&W .44 Russian revolvers in the hands of Japanese officers on Guadalcanal early in 1943.

Not all S&W .44 Russian revolvers were shipped abroad. The only change made to ones sent overseas or sold domestically was that for the latter ones the barrel inscription were in English. Those sent to Russia naturally had inscriptions in that language.

This handgun cartridge has received little notice in western mythology although many .44 S&W Russian handguns have been documented in Old West gunplay. Infamous Texas killer John Wesley Hardin used an early 1st Model .44 Russian in at least one of his many shootings. And when the James gang was shot to pieces during the bank robbery attempt at Northfield, Minnesota in August 1876 several .44 Russian revolvers were taken from wounded or dead gang members. Jesse James himself was killed in 1882 by Bob Ford with an S&W New Model .44 Russian. According to Smith & Wesson historian Roy Jinks all No. 3 Smith & Wesson frames were built prior to 1898 even though the company still cataloged New Model No. 3s until 1912.

Let’s go back to the .44 Russian cartridge itself.  Nominal case length is .97 inch, compared to .91 inch for .44 S&W American. Rim diameter is a prominent .515 inch as was necessary for functioning in Smith & Wesson’s star type extractors. Nominal .44 Russian bullet diameter is .429 inch.

During the 1990s I collected a sample of every version of Smith & Wesson Model #3 revolvers. They are beautifully made handguns but as said by Roy Jinks they were all built before the smokeless powder era. Every time I fired one of them with modern propellants there was a small cloud of fear in the back of my mind that those very expensive collectors’ items would be damaged.

Then around 1999 something miraculous happened. The Uberti Company of Italy began producing a replica of the 3rd Model .44 Russian of modern steels.  I obtained one and have been most happy with it. No more worries about shooting smokeless powders and as an added bonus it functioned without binding when black powder was loaded in my cartridges. (Cleaning it afterwards however was a lengthy chore.) 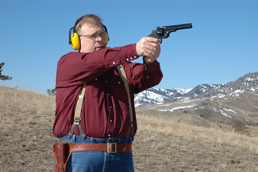 The Author firing his Uberti copy of the SW 3rd Model .44 Russian.

Handloading .44 Russian is a joy. Starline produces ready to load brass and of course any .429/.430 inch lead bullet between about 180 to 250 grains is usable. Reloading dies are available from most manufacturers. Mine currently are the RCBS “cowboy” style with carbide sizing die and case mouth belling die with plug diameter of .426 inch. Lyman’s #49 manual once again has .44 Russian data but stops at 3.6 grains of Bullseye with 245 grain bullets and 3.8 grains with 200 grain bullets. Speer’s reloading manual #14 has .44 Russian data only with 200 grain lead bullets. It goes up to 4.0 grains of Bullseye. The only current .44 Russian factory load of my experience is Black Hills Ammunition’s “cowboy” one. It carries the same 210 grain flat nose bullet used in their .44 Special “cowboy” load.

Occasionally during warm months a few friends and I gather to “shoot steel” with single action revolvers. At first there was snickering at what they called my “ugly gun” as compared to their more graceful Colt Single Action Army sixguns.  After shooting against it the laughing stops.