Flexibility of the .357 Mag

The .357 Mag is one of the most flexible handgun rounds. That is especially true if you handload. Aside from your .357 loads, you can fire several others in it, including the .38 Short and Long Colt and the .38 Special. In a pinch, the .38 Super can be fired through a .357 Mag, however that is not recommended on a regular basis.

One of the reasons the .357 Magnum is such a good caliber is that the selection is so vast. Brass for both the .38 and .357 are typically plentiful. My favorite brand is Starline. Besides the reasonable prices, the quality is always good. I use their brass for forming other calibers and it works better than anything else.

A .44 Magnum is a great round, but is harder to control with full power loads. It can be loaded lighter, but then you might have a large gun that can’t be utilized with the top loads. We could spend all day arguing the merits of any caliber but when it is all said and done, in my opinion, the .357 Mag is the most flexible handgun round you can find. Bullet weights can go from 60 to 200 grains. Heavier bullets can also be used, but a lot of velocity will be sacrificed.

For self-defense, the .357 Magnum is at the top of the list. With documented shootings, it ranks higher than practically everything else, assuming the correct bullets are used. Of course, there are more powerful handguns, but they are harder to control. If you can’t control a handgun, it becomes much less useful in a self-defense situation. 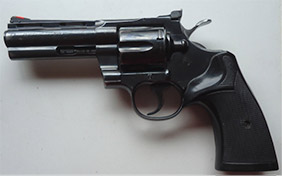 I have a friend I load for who goes to Tennessee deer hunting with his .357 Ruger Blackhawk. They have a generous limit on deer so he has plenty of opportunities to shoot. For the load, I use either a Hornady or Sierra 158 grain flat nose with a good dose of 2400. This load gives good penetration and accuracy, so consequently, my friend’s freezer never lacks for venison.

Everyone who makes bullets does so in the .357 caliber. There is everything available from lead to high-tech bullets, even some lead free. If you include a .357 rifle in the mix, then you have a good combo for any task, all the way up to large game hunting.

Selecting Bullets for the .357 Mag

Since there is such a vast selection of bullets, let’s break them down. For the majority of shooting, cast loads will do just fine. They are more economical than jacketed slugs and just as accurate. If they are made properly, no leading will occur—a common complaint I hear from shooters. A good hard cast bullet that is properly lubricated will give you good service.

Some 180 and 200-grain gas check bullets are made for hunting. They give good penetration on large game because they are hard cast. If your bore is rough, leading can occur with any cast bullet. Shooting a couple hundred jacketed rounds through a new gun will usually cure the problem by smoothing out the bore.

There are some cast bullets meant for hunting that weigh from 160 to 200 grains. You will be better served by using .357 cases for hunting as they have more capacity then a .38 Special case. There are a few .38 loads that show the difference between the two rounds. In addition, you will notice a very significant difference between the handgun and rifle loads, especially with the heavier loads. The two reasons are that the rifle lacks a flash gap, which causes a velocity loss, and the longer barrel. In a rifle, the heavy loads would make a decent deer load at close ranges. Some of the heavier loads will produce over 1000 FT LBS. of energy at the muzzle and around 900 FT LBS. at 100 yards. Such loads will equal a .223 in energy.

If you want full metal jacketed bullets, there are a few options. Remington makes a 130 grain, which would be good for game that you might not want to ruin the hide or meat. Armscor makes a 158 grain round nose, but they don’t put a cannelure on it. In some instances, it may slide in the case and not produce the best results. Since they are so inexpensive, I use a C4 tool and put on a cannelure which makes it a more desirable bullet.

Berry and Ranier make bullets without a cannelure as well, but it is an easy task to install one. They are copper plated and their cost is somewhere between a cast and a jacketed slug. For more of a variety, you can also buy C4 dies and jackets and make your own—swaging. I do that and have made quite a variety, including some frangible types. With that, you are only limited by your imagination and tooling.

If you have access to cheap lead then you can cast your bullets for almost nothing. There are many molds available in various weights and shapes. The only downside, which is true with swaging, is that time is involved. Both take a lot of time, and there is the initial investment in the tooling.

One old trick is loading a hollow base wad cutter backwards. It makes an impressive looking hollow point. When they expand, the mushroom is impressive. However, they don’t always act as expected. Sometimes the bullet will fold over which acts as a conventional bullet.

Many shooters, including yours truly, use .38 cases for most of our shooting. For target and plinking, they are fine. .357 cases are exceptionally good for hunting and self-defense loads. Years ago, I did some competition shooting and everyone used a .38 or .357 revolver. This was before high capacity 9 mm pistols came into general use. My load was 4.5 grains of 231 behind a 130 gr Hensley & Gibbs SWC bullet. I loaded thousands of them on a Star machine and in the model 19 I used, accuracy was outstanding. Recoil was mild and the velocity was enough to do well at 25 and 50 yards.

Like most shooters, I use .38 Special cases for target loads as opposed to a .357 Magnum case. Years ago, I did some competing and used a model 19 in .357. My favorite load in a .38 case was 4.5 grains of 231 with a Hensley & Gibbs 130 grain SWC. Accuracy was excellent while keeping recoil down and it gave enough velocity to be useful out to 50 yards. There is nothing wrong with using .357 cases if you want to maintain the same velocity as a .38 case. Adding ½ grain of powder will fix that.

If you wanted to write a book, one could easily be written on .357 loads because there are so many powder and bullet types. It would take a very long time to test and list them all. Even black powder and its substitutes could be used in a pinch—but not recommended on a regular basis. Black powder will jam up a revolver with just a few shots and the velocity will go down.

There are also some specialty loads that can be used, such as shot loads. Speer makes a capsule you can fill up with shot and load it like you would a bullet. I have made some and they are good out to 5 to 8 yards. Such a load would be useful for snakes on a hiking trail. Any size shot will work but 7½ or 8 shot would be the best since you can get more pellets in the capsule.

Since the .357 Magnum is so popular and plentiful, I can’t imagine having a gun collection without having at least one. Some years ago I had a COP, a 4 barrel Derringer. I used it for carrying in some instances. It shot fairly well but the trigger was horrendous. There are other Derringers chambered for the .357. In my collection I have an old model Ruger pre 73. It has not been converted and never will be. It has been shot more times than I can think of and it is still tight and smooth. In addition, I have an old model 28. With its heavy frame, it is ideal for testing various heavy loads. 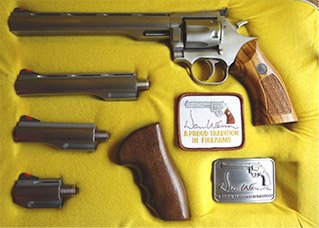 Like the ammo, the selection of guns is almost endless. There is even a semi auto or two in the mix. My carry gun is a S&W model 19 with a 2½” barrel. I like the power and accuracy it provides and I don’t consider 6 shots a handicap. That along with the various single shots, such as the TC models, shows why the .357 Magnum is the most popular and versatile revolver round.