The first thing one must know when becoming acquainted with the .38 WCF/.38-40 is that it’s nowhere near .38 caliber. It is actually .40 caliber using .400 inch bullets. Why Winchester named it .38 is a mystery. Then the first question one should ask about this cartridge is why it was introduced in the first place. Its original black powder factory loads used 180 grain .400 inch bullets compared to the .44 WCF/.44-40’s 200 grain .425 inch ones. Velocities were roughly comparable at about 1,300 fps from the 24 inch barrel of a rifle and about 900 fps from a 7 ½ inch handgun barrel.

History of the 38 WCF

It has been written that the .38 WCF was introduced by Winchester in 1874 as the second chambering of their Model 1873. That is incorrect. It most certainly was the second chambering offered for that lever gun but the year of introduction was 1879. Colt didn’t get around to chambering it in their revolvers until 1884. Another interesting fact is that Colt continued to chamber it in their large frame New Service revolver until its discontinuance during World War II. While just about every handgun manufacturer of that era offered .44 WCF/.44-40 as an option very few made .38 WCF revolvers. S&W did so with their New Model #3 and later N-frame Hand Ejectors but the totals produced were meager.

Regardless .38 WCF was the Colt SAA’s third most popular chambering among the 1873-1941 period of production. (Commonly called 1st Generation.) That amounted to a bit over 50,000 counting standard SAAs and Bisley versions together. Back about 1993 Colt reintroduced the .38 WCF in the SAA’s options. (By this time production was in its 3rd Generation.) I had one of the very first and have owned several others. Two are permanent keepers: one with 5 ½ inch barrel and one with 7 ½ inch barrel. Whereas 1st Generation Colt SAA barrel/chamber mouth dimensions are all over the map, all 3rd Generation ones that I have personally measured are uniformly .400 inch across the barrel’s rifling grooves and .401 inch at the chamber mouths. Mine are the most accurate .38 WCF handguns I’ve ever fired from machine rest.

Winchester continued .38 WCF as one of the Model 1892’s chamberings, Marlin adopted it into their Models 1889 and 1894 and Colt put it into their pump action Lightnings. It is my opinion that the .38-40 moniker came from Marlin’s caliber inscription. Colt only labeled Lightnings “.38 CAL.” Winchester never put anything but .38 WCF on theirs. Taken collectively there have to have been hundreds of thousands of .38 WCF/.38-40 long guns manufactured. That is far more than revolvers by a considerable margin.

Browsing through my lifelong records revealed that I’ve owned an even dozen .38 WCF handguns and an even dozen rifles and carbines. All of the handguns were Colt SAAs except for a New Service. All of the long guns were lever guns except for one Colt Lightning Pump Action. Additionally there were three Marlin Model 1894s listed, three Winchester Model 1873s, three Winchester Model 1892s, and two Cimarron Arms replicas of Model 1873s. I don’t remember there being a lemon among all 24 of the .38 WCF firearms owned by me. 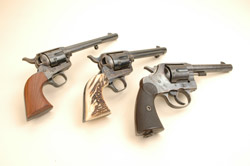 About five years ago I began trimming back my Old West firearms collection. When the excess was cut out there were still three Winchesters and three Colt revolvers left in this caliber. The Winchesters consist of Models 1873 and 1892 rifles and a saddle ring carbine version of the latter model. Two of the revolvers were new Colt SAAs mentioned before. The other is a New Service with 5 ½ inch barrel.

Some people consider the .38 WCF/.38-40 a difficult cartridge to handload. I don’t because I recognize the inherent problem one will encounter with it. That is that the case is bottlenecked and in the older days of its existence there were no standards by which all companies cut their chambers. Generally speaking rifle chambers were looser than those cut into revolver cylinders. For a modern handloader to successfully resize cases so they fit in all chambers requires a die that sets their shoulders back significantly. Some modern reloading dies do not accomplish that. My set dated by RCBS in 1983 does and my rounds fall in all my .38 WCF chambers.

What else is required for successful .38 WCF shooting in lever guns is a very stout crimp of case mouth to bullet crimping groove. I learned that fact the hard way by loading up my Winchester Model 1873’s magazine fully so that its spring was compressed to the max. Upon firing the first round I heard a “plop-plop-plop” sound. It was the noise made by all bullets in those cartridges being pushed back into the cases. Each one had to be laboriously fished out of the magazine by hand.

After firing many thousands of rounds of .38 WCF handloads I’ve come to favor one bullet design above all others. It is RCBS #40-180CM. It weighs 180 grains of one part tin to 20 parts lead alloy, and shoots the sort of groups target shooters crave. Most recently it has usually been loaded over 5.5 grains of IMR’s Trail Boss powder.

As said earlier, the .38 WCF is actually a .40 caliber. When government agencies and Smith & Wesson all conducted expensive research and development for an autoloading handgun cartridge more powerful than 9mm Parabellum the result was .40 S&W. It is the nothing more than the ballistic twin of our ancient black powder .38 WCF put into an autoloading case.