After you get your necessary equipment to reload a certain caliber, there are a couple of more decisions you need to make. You have to ask yourself what is expected of the ammo loads. Of course, it has to be within the capabilities of the selected weapon. For instance if you have a 30-30 and try to make it into a 300 magnum that is both foolish and dangerous. With safe loads, you can expect to shoot a 170 grain bullet at about 2200 FPS or maybe a slight increase but not much. The case capacity and action strength prohibit you to get much of an increase without undesirable pressure. If you want to get a significant increase in range, the Hornady 160 grain Flex Tip loaded with Hodgdon’s LEVERevolution powder can do it safely. You will get some increase in velocity but with the Flex Tip, you will get a lot less drop and can use it out to 300 yards on deer if you have the skill. There is no other way to safely get a significant increase in range with a 30-30 lever action. Hornady has Flex Tips for other rifles such as the 32 Win, 348, 35 rem, and 45-70 rifles. I have a TC 30-30 barrel that is 24” so I can use any pointed bullet and increase the velocity but that is only valid in a single shot or bolt action. If you hunt in the woods, where 100 yards is a long shot there is no reason to get more performance as any 30-30 factory equivalent ammo load will do fine on a deer. There are a good variety of powders that will give you the desired velocity with safe pressures and you should consult at least one good loading manual to verify correct loading data Sierra, Hodgdon and Hornady all produce good loading books and it doesn’t hurt a thing to have all three of them. A chronograph is essential if you are serious about making good performing ammo loads. You can get the desired speed and watch for excess pressure signs. Also the chronograph will let you know how consistent your ammo is which is important to producing quality loads. Keep in mind that each rifle will react differently using the same load. A 30-30 isn’t particularly hard to work with as it isn’t a large case shooting a small caliber bullet also known as an overbore round. You can take two identical rifles and get different results with the same load. 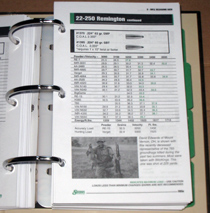 Ammo Loads to Meet Your Needs

There is a good selection of bullets for the common rifle calibers for various purposes. For instance, in target shooting and many hunting situations a regular cup and core bullet will suffice. They are less expensive and sometimes you can buy them in quantity. That allows you to practice more for less money spent. When I get a new rifle and scope I always start with the common bullets to get it sighted in and work up loads. If I plan on a hunting trip I work up a load with the less expensive slugs then if I am going to use a premium brand bullet I will then shoot a few to verify everything. A different bullet may hit to a different point of impact or require a tweak in the load but usually it isn’t a big difference though there are exceptions. You also want to check seating depth in case of an adjustment is required. Remember it is easier to fix a problem at the shop rather than in the field. If you are hunting game such as a white tail deer a common bullet will do the job as long as you have an adequate caliber and place the bullet correctly. A premium bullet and a magnum rifle will not make up for poor shooting. One area often overlooked is cast bullets. Unless it is a larger caliber they are not generally useful for big game hunting but for small game and plinking they are hard to beat. Properly loaded they are capable of good accuracy. With the great selection of components offered today shooters never had it so good but you just need to put in a little thought into the selection process.

When you are working up ammo loads there should be a few goals in mind. First of all the ammo has to be safe to use. If the ammo is unsafe nothing else matters. If you discover that you put in the incorrect powder or too much pull them rather than shooting that ammo. If it is safe then you want it to feed and chamber in the weapon it was made for. Then you are looking for accuracy and reliability. This is where you select the correct bullet for the job at hand. This is stuff that while is basic info needs to be followed to produce good quality ammo. If you don’t have the time or patience to follow the correct procedures then you want to consider buying your fodder from someone else. 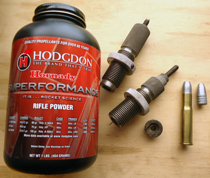 Like rifles handguns offer a good selection of reloading components. To start anyone who overlooks cast bullets is missing out on a lot of options. There are a few semi autos that are not suitable for the cast verity but you be able to might buy an after market barrel. Cast bullets are less expensive and are generally easy to obtain as most areas of the country have at least one commercial bullet caster in their area. They will give as good accuracy as jacketed bullets virtually all of the time. I hear complaints that they lead the barrels causing more cleaning problems. That is true in some instances but let’s look at the reasons. A new barrel might be rough which will collect lead. Usually if you fire two to 300 rounds of jacketed slugs, the barrel will get smoothed out, resolving that situation. Other reasons for leading might be poor quality bullets or lube that was used. Loads that are too hot can cause leading also. For general target practice hot loads are not necessary or desirable. If you are using heavy loads in a rifle or handgun then you should select a gas checked cast bullet as it will cut down on leading. Some semi autos won’t feed lead bullets so that might be an issue. Some semis have barrels that are not suitable for cast bullets such as the Glock. An after market barrel will fix that. I have found that if you use a good hard cast bullet and tumble the loaded ammo in a tumbler with torn up newspaper that can aid in feeding. The newspaper polishes the bullet making it easier to go up a feed ramp. Another advantage to tumbling loaded ammo is if the bullets are loose they will fall out in the tumbler making you aware of an ammo problem. If you insist on jacketed bullets then you can use plated slugs for most purposes. They are swaged with a copper plating and are less expensive than conventional jacketed bullets. I have shot quite a few and they are accurate and feed well. There are full metal jacketed bullets offered in some calibers such as the 9 and 45. They make good target rounds and feed in anything. While more expensive then cast or plated they are cheaper than hollow points and specialized bullets. Hollow points are preferred for self defense and some hunting situations but are not necessary for general plinking. They are no more accurate then the other slugs so there is no advantage to using them for informal target practice. If you are developing a serious load for hunting or self defense you can start with the less expensive types then trying out the more serious loads for carrying. Keep in mind if you use handloads in a self defense situation there may be a legal problem. Some anti-gun areas might give you a hard time claiming that you were looking for trouble so you loaded your own to do more damage to an assailant. While common sense dictates that it is a ridiculous conclusion none the less some authorities may come up with that. Another thing is some factory loads are very effective and it is difficult to make a handload better then them. You can work up an ammo load that closely duplicates the factory load for practice and carry the factory blend for social purposes. Go figure. 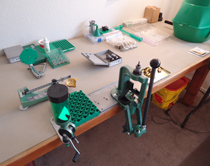 Reloading is a great hobby in itself and if done properly you can produce great ammo at reduced prices. After the initial investment in equipment and supplies you should start saving money. Once you get set up you will no longer have to depend on someone else for your ammo. With the stupid laws being proposed and the panic buying going on, that is another reason to consider reloading. Another upside is you will learn about ballistics and guns in general.