What Tools You Need for Reloading

When you get into reloading , the first thing you need is reloading tools and equipment. Everyone is going to tell you about the press, scales and powder measure plus your dies. There are many publications that describe those items and which ones you need. That is a good place to start but you need a lot of other items mostly small low cost tools. They are important and necessary to conduct a successful reloading operation so we will discuss those.

Small Reloading Tools you will Need

There are a lot of smaller reloading tools that are just as important in order to have a successful reloading operation. For instance, you need to measure your loaded length of a cartridge and for that a vernier caliper is necessary. Bullet seating depth can affect the accuracy and pressure of a round. Another handy measuring tool is a micrometer, which can be used for measuring the diameter of a bullet or case. Of course the vernier can do that but it is nice to have both reloading tools. There are several ways to lube a case before sizing and the method you use is a personal choice. There are sprays and paste that you rub on. Then the old school method is a lube pad with the proper lube. It might sound like much but if you don’t or under lube a case it can get stuck in the sizing die. You can get it out but it is a difficult job and will probably cause you to use a couple of expletives. The tool for that is a stuck case remover which should be on your bench just in case. When you size bottle neck cases the inside of the neck should be lubed. You can buy a set of brushes and graphite lube to perform that task. A gun cleaning brush of the correct caliber with some dry lube also works fine. When you size a case the die purposely sizes the neck too small and when you do the upstroke the expander plug drags through the neck. It is much more difficult without the lube. Another help on that job is a tungsten expander plug. Don’t use lick wood lubricant because it will stick to the inside of the neck stopping the powder from dropping in. You can take a brush with a piece of cloth to wipe it out but that is another step.

You need a case trimmer especially if you load rifle cases. They stretch and if they are not trimmed problems will ensue. Cases will be hard to chamber and accuracy will suffer. In an extreme instance dangerous high pressure may occur. You need collets and pilots to match the case rim size and caliber. While they have a handle to use a drill hooked up to it is a lot faster especially if you are doing a large amount or taking a lot off which might be necessary for case forming operations. A pair of safety glasses is a must as small particles may get into your eyes. For convenience you can get a case length gauge which shows the proper length of most of the common rounds. Just put case in the correct slot and if it fits you are good to go. 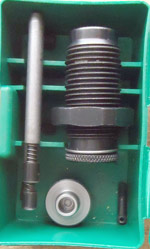 Priming might seem to be a small part of the operation but it can be a pain in the keister. If you have military cases with a crimp, it must be dealt with before you can prime. There is a tool that you can use but it never impressed me. I ream out the pocket a little using a chamfering tool and hook it to a drill if I am doing a lot of them. Another small tool is a primer pocket cleaner. After your cases are fired and reloaded a few times residue builds up in the pocket. If allowed to accumulate primers may be hard to seat fully. You can actually hear the crunch when there is too much residue present. Having the right tools makes priming and your life much easier. There are various ways to prime a case and the choice might be personal. Some companies sell hand priming units and while they work ok, I don’t use them but that is mostly my personal choice. I use my press and sometimes use a ram priming unit which mounts on my press. For speed you can use a primer tray and tubes to feed primers from a press.

Loading trays can be handy when loading ammo. After you put the powder in them, eyeballing them is easy. That way you can look at the powder to make sure they all have the same amount in them. Some powders can bridge, preventing the right amount of powder being dispensed into the cases. A powder trickler is a handy reloading tool when dealing with a coarse grained powder. Most measures won’t accurately throw the desired charge so you can set it up to be a few grains light and use the trickler to round it off. Some companies offer powder dippers which would be ok for general plinking ammo. Powder bushings are an option for some reloaders.

There are a lot of small tools that you might think of such as screwdrivers and pliers. They come in handy for many tasks and small problems that might arise. Other less obvious items are dental picks and tooth brushes. Dental picks are good for cleaning out the groove in a shell holder because over a period of time crud will accumulate there which makes it difficult to get a case all the way in. Both items can be used to clean out various small places in your press or other equipment that accumulates dirt.

There are two type of reloaders in this world. Those who have put the wrong powder in ammo and those who will. Hopefully you will catch the error before you fire the rounds. If that is the case you need a bullet puller. That is the eraser of reloading which enables you to pull the bullets and fix the problem with out any serious problems. While it takes some time, material loss will be cut. There are two types of pullers being used. One is a die that goes into your press and with the proper caliber cullet you use the press to pull the bullets, by gripping them and pulling. It works well with rifle but not handgun bullets because they are hard to grip. The other type is an inertia puller. It looks like a hammer you just insert round in, I use a shell holder as it works better, and just use like a hammer. If you are pulling old military ammo, which can be difficult, I seat the bullet in just a little deeper, which breaks the seal and that makes it easier to pull. Under no circumstances try to pull rimfire ammo with an inertia puller because it might go off, causing a serious injury.

Chamfering reloading tools are important, as they will help you make quality ammo. When I get ready to load rifle ammo, I always chamfer the case mouth, especially the inside. That makes bullet seating more consistent and easy. The end product is more consistent and accurate ammo. Of course if the case is trimmed chamfering both inside and outside are necessary to get rid of the rough edges. Like most of the tools mentioned, they are small and inexpensive but necessary.

Some of the items used in reloading items used sometimes break. For instance decapping pins are subject to breakage. You can buy packs of replacements so if one breaks it is a minor nuisance instead of a disaster. Expander plugs and decapping rods are also good items to have on hand. Various little screws and extra shell holders can make life easier in the event of breakage or loss. As you go along other items may be needed depending how you set up your operation. A well equipped bench will have these items on hand to make your reloading better and easier.