If you like snakes, especially venomous ones then you ought now read further. I don’t go looking for snakes to shoot and never bother a harmless one. That said, I also don’t feel any pangs of conscience about using snake shot on a rattlesnake found around human habitations. 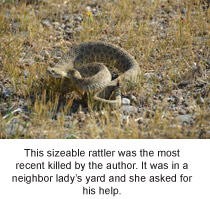 Recently a German reader visited. As cat and dog lovers, he and his wife were thrilled with our large array of beautiful and friendly felines and canines. However, at one point I mentioned “my snake-gun” and the German fellow attempted to correct me. He said, “Ah, but everything has its place in nature.” I replied, “Only a moment’s encounter with one around our home and outbuildings to end the life of one of those beautiful cats or dogs you just commented about.” That’s saying nothing about what it could do to Yvonne or me or any of the numerous visitors we host during warm months. He got the point.

The Reason for Using Snake Shot

In the quarter century Yvonne and I have made our home on this piece of Montana, I have killed rattlers in our driveway, on our front porch, around our parked vehicles, by the door of our shop, and in our horse corrals with snake shot. One time a fellow I hired to mow our considerable lawn knocked on the door to say, “I just saw a rattlesnake crawl through a crack around the door of that white shed out there.” That white shed happens to be my gun powder, ammunition, and bullet storage place. My response to the fellow was, “Well, he owns it then. I’ll be damned if I’m going in there after him.” And I didn’t until well into a frigid winter.

For warm months there are “snake guns” stored near our outer doors. They are always revolvers. One visitor asked why I didn’t just use a shotgun. The answer is again simple. The entire purpose of killing the rattler was to insure the safety others. Turning loose a large gauge shotshell around houses, out buildings or roads could endanger someone. The same is true with regular bulleted handgun cartridges.

The revolvers kept by our doors stoked with snake shot loads are always big bores - .44s or .45s. One that I bought especially for this purpose is a Colt SAA Sheriff’s Model .44 with three inch barrel which came with both .44 Special and .44-40 cylinders. Only the first mentioned one is used because I’ve found it next to impossible to get plastic shot capsules to stay put in thin-walled .44-40 brass. I often stick this short barreled Colt in my hip pocket when going about outside during the summer. For safety it is loaded with only five rounds with the hammer down on the empty sixth chamber. 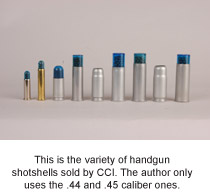 A few years back Speer finally added .45 caliber shot capsules to their catalog. Along with their long time available .44 caliber ones my handgun shot loads are satisfied. In fact in the past year they were not even used because I have a good supply of CCI factory loaded shotshells on hand ranging from .22 LR to .45 Colt. The rattler shown in the accompanying photo was dispatched with a .44 Spl/Mag one containing approximately 170 #9 size pellets. It worked.

Why Use Revolver Snake Guns?

A natural question would be, “Why insist on revolvers? CCI snake shotshells also come in 9mm, .40 S&W and .45 Auto calibers.” That’s true and in fact the .45 Auto shotshells are labeled as carrying 210 #9 pellets as opposed to the .45 Colt’s approximately 150 of the same size. My preference is due to reliability. From experience I know a semi-auto pistol cannot be counted on to function for more than the first round with shotshells. I have encountered more than one rattler at a time.

This following complaint about CCI factory handgun shotshells is strictly opinion. I think for the most part the big bore ones use shot too large for the purpose. For .22s and 9mm they use #12 and #11 shot respectively. Then they go to #9 for everything else. Over a quarter century back I landed a single bag of #12 shot and have used it exclusively for my snake loads. It works wonderfully for our prairie rattlers – they don’t even squiggle after blowing a cloud of #12 into them. Admittedly, however, it may be too small for some of those monster size rattlers found in warmer climates.

Snake- lovers and greenies may abhor my killing of rattlers. I am neither. Some well-intentioned souls have even suggested that I relocate them. First; most people get snake bit by trying to handle the things. That will never be my fate. And second; this area is populated enough that moving a rattler will just make it someone else’s problem.

For the continued safety of my wife, myself, our livestock and our treasured pets I shoot every rattlesnake encountered around here with my colt snake gun, all the while leaving harmless reptiles to go on their way. CCI shotshells and Speer plastic shot capsules allow me to do that in what I consider the safest possible manner.