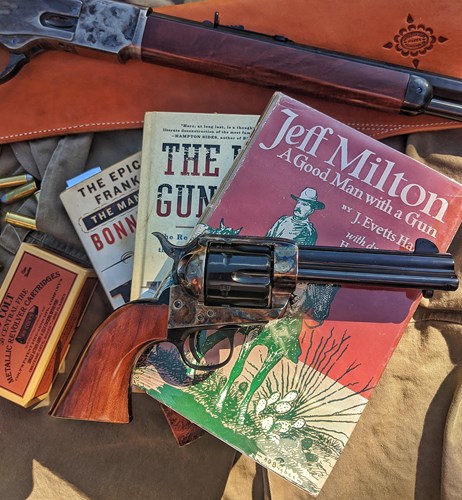 Often times when conversation of famous gunmen of the old west comes up, many want to know what gun/cartridge said gunmen used. Dime novels and Hollywood have often spread inaccuracies and caused false perceptions of what firearms were used.

Ned Buntline spread the fallacy that Wyatt Earp carried one of his 12" barrel single action revolvers at the OK Corral. The truth is, many of the famous lawmen were gun guys like you and I, they experimented with different guns, often trying out the latest and greatest feat in firearms tech. Wyatt Earp most likely carried a Smith and Wesson No. 3 at the Fremont Street fight, but was known to carry many different guns throughout his pistol packing days.

Frank Hamer, while known for carrying his Single Action Army well into the 20th Century, was always trying out a new rifle, hence why he is seen with Savage 99s and later his personal favorite rifle, the Remington Model 8. Jeff Milton, owned many handguns and rifles, and stayed up to date with modern improvements as well, hence his use of the space-age looking Savage Model 1907 automatic during the 1917 Tombstone bank robbery previously written about. This is all to say that the men of old west lore were no different than we are today in terms of weapons modernization.

In the case of personal protection, there is no such thing as an "unfair advantage." With this change in weaponry came a change in calibers. When Jeff Milton first joined the Texas Rangers he purchased an ornately engraved, pearl stocked Colt SAA in .44-40, however after spending some time shooting it, he had an issue of raised primers in his ammunition and found the cylinder would bind up and would not rotate. Whether this was a case of bad ammo and he took it for granted that all .44-40 would cause this issue, he decided to get rid of the pistol. In his mind, he didn't feel comfortable entrusting his life with something that hadn't functioned properly with him, so he traded the 44-40 SAA with a gambler who had an equally beautiful SAA in .45 Colt.  Jeff never went back and carried a .45 Colt for most of his days packing iron. Whether he was carrying the Savage .380 as his primary sidearm in 1917 or as a backup is unclear.

Many at the time had began carrying the compact "pocket pistols" including Frank James. By today's standards, the .380 is considered rather puny and by some estimations, obsolete. That's neither here nor there, but one thing is certain he was proficient with it. In the case of Capt. Hamer, using "Old Lucky", his .45 Colt SAA, that wasn't a matter of defiance of the new age, but rather he used what he knew and was comfortable with. In 1934 when he took after the trail of murderous cowards Clyde Barrow and Bonnie Parker, he obtained a Colt Government Model in Super 38. At the time, Colt's fast and deadly Super 38 was the ticket for penetrating vehicle bodies and period body armor, something the fat and slow moving .45 didn't do well. His situation included the possibility of having to shoot through or into a vehicle, a possibility that became a reality in the end.

In conclusion, professionals and responsible gun owners are meticulous in their selection of a firearm and caliber.

The truth is there is no one right choice when shooting, some calibers work better than others for certain applications. The one thing that all the aforementioned men had in common was they chose quality firearms and effective cartridges that fit their situation, and they practiced with them constantly, so should you.

In the shooting world it's important to remember that quality should be the goal of all shooters. Settling for second best isn't an option. In the case of brass for handloading, Starline has been consistently the best brass for a wide variety of cartridges including all that I mentioned earlier.