The AR platform is one of the most popular rifle systems on the market today, but the vast majority of them are chambered for the .223/5.56mm. Not everyone (including your seldom-humble correspondent) is enamored with this round. Why? It’s just a “rat gun;” shooting lightweight bullets of modest power. As a result, numerous larger-caliber rounds have been developed for the AR that offer more versatility and potential for personal defense or hunting game larger than coyotes, because bigger is better, for a lot of things. 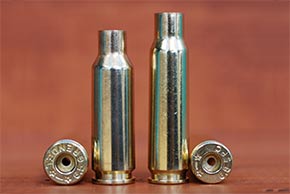 The 6.5 Grendel and 6.8 Remington Special Purpose Cartridge (SPC) cartridges are prime examples of a better mousetrap. Both offer excellent accuracy, increased lethality, and excellent down-range ballistics to expand the potential of the AR. In fact, these two rounds (in that order) are my favorite AR cartridges. 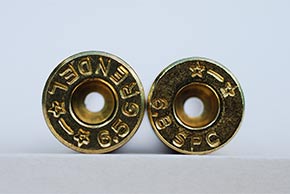 Both the 6.5 Grendel and 6.8 SPC use small rifle primers. Although the 6.5 Grendel case is slightly larger in diameter than the 6.8 SPC case, it fits nicely in the AR platform. Note the uniform primer pockets and flash holes in the Starline cases.

The 6.5 Grendel and the 6.8 SPC cartridges both have unique pedigrees. The 6.5 Grendel is the brainchild of Bill Alexander of Alexander Arms. In an interview, Bill told me that he “designed it specifically as a hunting cartridge.” The 6.5 Grendel is very similar in size and shape to the ultra-accurate 6PPC. The PPC case is based on the .220 Russian, which is in turn based on the 7.62x39. The 6.5 Grendel shoots bullets from 85 to 123 grains at decent velocities and with great accuracy, and is one of the most efficient cartridges ever designed. It is now also available in several light hunting bolt-action guns, a major plus for the round. 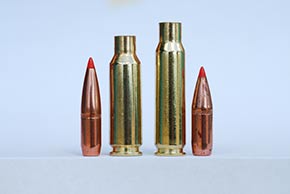 The 6.5 and 6.8 can use bullets twice as heavy as the 5.56mm, and make both cartridges suitable for deer-sized big game, shown here with Hornady SST bullets.

The 6.8 Remington SPC is the outgrowth of requests from overseas operators who complained that bad guys shot with the 5.56 didn’t “stay shot;” thus, the “Special Purpose” moniker. The 6.8 SPC is really just a “.270 Short” that easily shoots bullets up to 130 grains out of an AR. A comparison of the two rounds, along with data on the .223 Remington, is shown below.

Both the 6.5 Grendel and 6.8 SPC lend themselves well to hunting. I took a 236-pound aoudad ram with my 6.5 Grendel, and have taken deer with my 6.8 SPC. In addition, both are very accurate, pure delights to reload, and offer great versatility on bullet selection.

Before I started load development, I first wanted to check the uniformity of the weights and lengths of Starline cases for the two rounds. I had used Starline handgun cases for years, but had no experience with their rifle brass. I selected a random sample of 50 new Starline unfired cases for each cartridge. Each was weighed to 0.1 grain on an RCBS M-1500 Electronic Scale, and measured for length with a Frankford Arsenal digital caliper to .0005 inch. The results are summarized below. 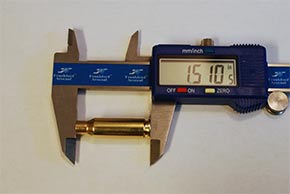 Lengths were checked to .0005 inch with a digital caliper. 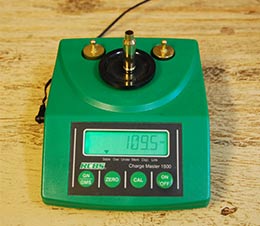 50-round samples of Starline 6.5 Grendel and 6.8 SPC cases were weighed on an RCBS Model 1500 electronic scale.

My Dad used to tell me that I was “tight as bark on a tree.” Ahem. I prefer the term “frugal.” Nonetheless, I routinely load cases until they’re black and blue, and I’m plum ashamed of myself. However, I am happy to report that I didn’t have a single case failure or split neck with any of the Starline 6.5 Grendel or 6.8 SPC cases reloaded in the course of shooting hundreds of test loads.

Even though the two test rifles were ultra-reliable ARs, it never hurts to pay attention to fundamentals, and good reloading practices. Let’s start with resizing. Many loading manuals sternly admonish that a small-base sizer must be used for loading ammo for semi-automatic rifles for “reliable functioning.” The “rationale” is that you need ammo a little loose to work in the slam-bam functioning of ARs. Huh?

The chambers of semi-autos are usually plenty generous, anyway, so why would we need to make their ammo smaller? And have you ever miked the bases of cases sized in regular and small-base dies? I have, and usually there’s little or no difference whatsoever. In fact, I have encountered cases sized in small-base dies that were larger in base diameter than those sized in regular dies. For my handloads, I used standard dies for both rounds; Hornady dies for the 6.5 Grendel, and Hornady and RCBS dies for the 6.8 SPC.

Another trick to lengthen brass life is to size fired cases just like you would for a bolt gun, i.e., just enough to chamber freely. This is easy. First, deprime a case fired in your rifle, and measure the cone-to-head (C-T-H) length; the Hornady “Lock-N-Load Headspace Comparator” on your caliper is the perfect tool for this chore. Then size the case, and repeat the C-T-H measurement. If it’s more than .005 inch shorter, screw the sizer out a tiny bit, and repeat with another case. Keep fiddling with it until a sized case C-T-H length mikes only .002 to .003 inch shorter than a fired case.

Some 6.8 SPC cases have crimped-in primers, so be on guard for them. This crimp has to be removed before repriming. I have found that a power cutter is the best way to accomplish this onerous task. Of course, Starline cases have no crimp.

The primer receives a serious whack from the firing pin, and any residue in the primer pocket left over after the last firing can cushion the blow. This does nothing for ballistic uniformity, so cleaning primer pockets is a good idea, too. Another tip is to use the relatively new No. 41 and Federal GM205MAR (Match AR) small rifle primers designed for use in the 5.56mm and 6.8 SPC. The new Speer Manual No. 15 states that both of these primers have “thicker cup bottoms to minimize [the probability of a] slam-fire in military-style firearms.” CCI says the No. 41 has about the same strength as their No. 450 Small Rifle Magnum primer, so substitute accordingly. All 6.5 Grendel and most 6.8 SPC cases use small rifle primers. As far as I know, only Remington uses large rifle primers in their 6.8 SPC ammo.

There are so many great powders available today that a feller can hardly go wrong when loading either of these great rounds. I have considerable experience reloading both of them, so I loaded some of my favorite loads in new Starline cases, and tried them in my test rifles.

Five 5-shot groups were fired at 100 yards with each factory and handload. When testing handloads, I like to shoot a few factory loads for comparison, and did so with each rifle. In the 6.5 Grendel, six factory loads averaged 1.06 inches, with top honors going to the Alexander Arms load with the Berger 100-grain HPBT. The 6.8 SPC averaged .76 inch for the six factory loads tested. 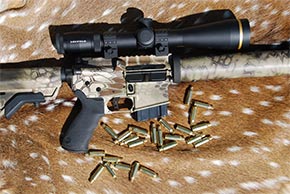 The 6.5 Grendel ammo was tested in this Grendel Hunter from Alexander Arms, with a Leupold VX-6 4-24x52 scope. 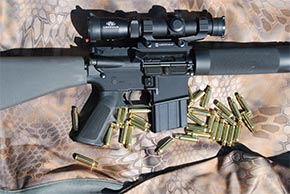 Finding the “right handload” for your gun is half the fun, but picking the “best” load is a real chore for these cartridges because they’re both so darn accurate. Plus, there are a lot of new powders of the appropriate burning rate that beg to be tested. My favorite powders and bullets for the 6.5 Grendel and 6.8 SPC cartridges that worked well in the Starline cases are included in the load data below.

Load data for the 6.5 Grendel is shown below. In this round, the overall average accuracy of all 23 handloads was .91 inch. Really, there were no “bad” loads, just some that were better than others. I stuck with standard primers for this round (although either the CCI-41 or Federal GM205MAR would work fine in the 6.5 Grendel.) 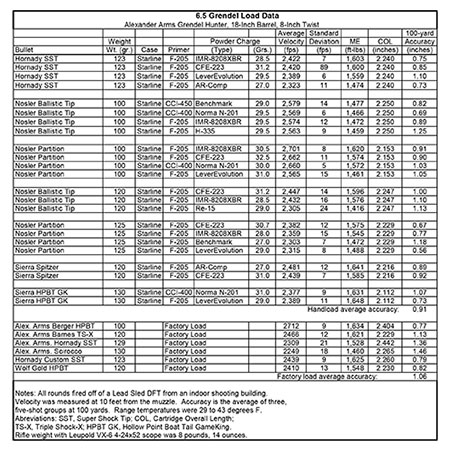 Newer powders like IMR-8208XBR, CFE-223, and LeverEvolution turn in high velocities and small groups in this super-efficient cartridge. The Hornady 123-grain was designed for the Grendel, and is perfect for deer-sized game. In fact, it was with this bullet that I shot the aforementioned aoudad ram, and it was one shot, down and out. So, if one had to pick a single bullet (a terrible dilemma, I know) for the 6.5, this would be it. Other winners are the Nosler 100-grain Ballistic Tip and Partition, and the Sierra 120-grain Spitzer. While the Sierra 130-grain GameKing shot fine, the velocity was under 2,400 fps with both loads tried, and I really think lighter (and faster) bullets are more suitable for the 6.5 Grendel.

Data for the 6.8 SPC are shown below. The 6.8 SPC shot pretty well, too. The average accuracy for the 19 handloads tested was 1.11 inches. I used the CCI-41 primers for several loads for comparison in the 6.8, and they too worked great. Powders like H-4198, IMR-8208XBR, H-322, and Benchmark were excellent, and spherical H-335 also shot well. The Barnes 85-grain Triple Shock-X and 110-grain Tipped TS-X were very accurate, with three of the four groups with these bullets under an inch. The velocity with the Nosler 100-grain AccuBond was over 2,600 fps. And it was no surprise that the well-known Sierra 115-grain MatchKing HPBT shot great with IMR-8208XBR. The highest velocity recorded in the 6.8 was with the Speer 90-grain NT Hollow Point, at 2,804 fps over 29.2 grains of H-322. 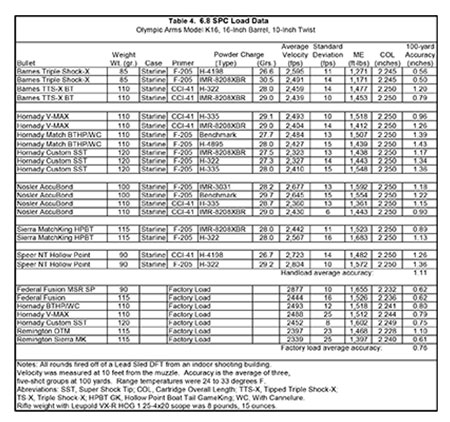 Overall, both sets of Starline cases were dimensionally quite uniform, lasted through many reloadings, and functioned perfectly in both test rifles over the course of the testing. The AR will no doubt remain one of America’s favorite rifles, and the availability of uniform, high quality cartridge cases contributes significantly to the success of any reloaded cartridge.

Starline brass has certainly made its mark with these two rounds, and it’s good to see its expanding line of cases for many popular rifle rounds, as well. Perseverance, quality products, and attention to detail have certainly paid off for Starline. They have truly found their niche. 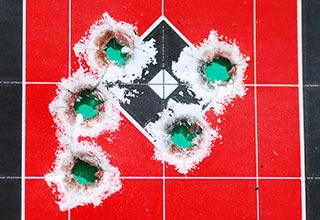 Hornady’s 6.8 SPC load with the 120-grain SST proved accurate as a baseline for handloads. 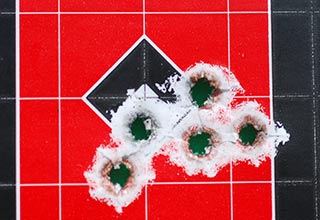 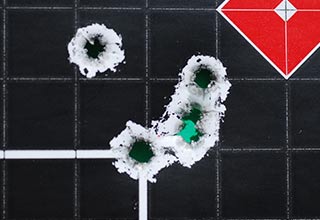 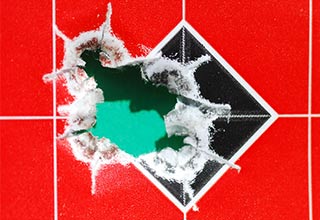 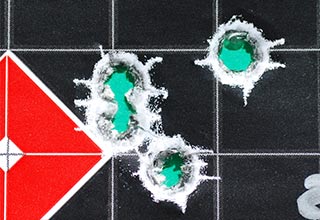 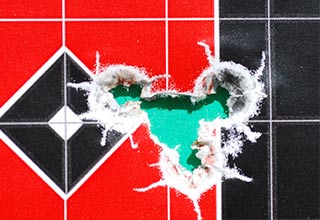 The history of Starline Brass is a textbook case in what an ecologist would call “niche fulfillment.” Starline has a solid track record making handgun brass, and in response to customer demand, has expanded into rifle cases, as well. The first rifle cartridge case made was the .308 Winchester. From there, Starline’s line of rifle cases has grown to include about 40 rounds, with more being added all the time. In addition to many standard cartridges, the company also specializes in unique and “old-time” rounds not readily available from the major companies—it’s that “niche” concept again.

Starline prides itself on three things in its cases: “quality, uniformity, and value.” The later two are self-explanatory. Starline’s definition of “value” doesn’t concentrate on making the lowest cost cases on the market; they let others race to the bottom. Instead, they concentrate on the quality and uniformity, and that translates into value.