Recently some companies started making cases with small pistol primers for the 45 ACP. Why? Who knows?  Anyway, it is something we have to deal with so I am doing testing on small VS larger through the chronograph. I have found that Federal and Fiocchi are using small pistol primers in their ammo.  It’s conclusive that large primers give more velocity with all powders tested especially the slower ones such as Herco. That is because the large pistol primer has a stronger ignition on the powder charge. Felt recoil was different with some of the loads that read 100 FPS difference or so.  You can also see that there is a difference between a 3” and 5” barrel and different guns with the same barrel length. It goes to show you that any change in components will change the end results. If you are using a max load and change any component, you should drop down about 5% or so to evaluate the new load. Otherwise, you could go over the top with the new load.

Many years ago, the 38 and 357 mag cases had large pistol primers but someone realized that a small pistol primers would work just fine. You will probably never encounter these cases but if you do make sure you reduce your load especially if it is a hot one.  I had a few and used them for blanks because of better ignition.  One irritating situation I encounter occasionally is undersized flash holes. In some situations, they will pull out the decapping pin from the rest of the assembly. That causes frustrating delays in loading ammo. Usually they are old cases but I recently ran into a brand of cases that has that problem. I am in contact with the maker to see what they can do to fix it. They are not Starline cases, as I have never had that or any other problem with that brand. 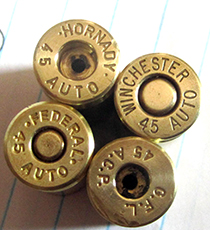 Starline makes 45 Colt and 5 in 1 cases especially for blanks and the heads are marked as such. The 5 in 1 cases closely resemble the 445 super mag so if you have one avoid the Starline cases. Under no circumstances, use them for smokeless powder ammo as that will almost certainly result in disaster. The powder can be over ignited causing a dangerous pressure spike.  I have also seen 400 Cor-Bon ammo with both size primers. Such situations are a pain in the keister. However, the prudent reloader should be aware of this situation.  If you encounter cases with different size primers be sure to separate and use correct load for each size. At one time, they made small pistol primers for the 30-30 but they evidently didn’t work out well due to under ignition of the powder and were discontinued.

When you assemble ammo, there are a lot of items that factor in the performance of the ammo. If you have a good load worked up and change primer brands the characteristics of the ammo may be changed. With normal loads under most circumstances, the change will be minor. With a max load, a primer change may cause it to be too warm so you might want to reduce the powder charge a grain or two if a brand of primers is changed.

Types and Sizes of Primers

There are two types of primers in use today the Berdan and Boxer. The difference is the Berdan has the anvil in the case while the anvil is in the Boxer primer. Some foreign military rounds employ the Berdan, which reduces the cost. The American makers who produce aluminum cases use the Berdan to prevent reloading them. Ironically the Berdan was invented by an American while an Englishman invented the Boxer type. For reloading purposes there is no contest the Boxer wins hands down. A simple decapping pin removes the spent primer while a special tool is needed for the Berdan. It is a slow process to remove it though it isn’t any harder to prime the Berdan as long as you can find the right primer size and have the correct tool.  There were other priming systems such as the Benoit inside primer. It is located inside the case and the round looks like a rimfire.

There are two sizes of primers large and small. Then it is further broken down to handgun and rifle. Then you have standard and magnum primers. In addition, there are some made for special purposes such as military and target loads. Choosing the correct primer is important in order to be successful in making good ammo.  The old primers were very corrosive and those that had fulminate of mercury in them would destroy cases by weakening them. Old primers were corrosive and you would have to clean the gun as soon as possible to avoid pitting in the barrel. Much of the foreign military ammo made today is also corrosive and some though not all of it is labeled so. If you are not sure, treat it as corrosive to be on the safe side. I suppose Berdan corrosive primers are cheaper to make hence their production.

Handgun primers have softer cups because the firing pin hit isn’t as strong as a rifle pin drop. Also they are not a tall as a rifle nor do they contain as much ignition material as the rifle because they don’t have to ignite as much powder.  It isn’t a good idea to use the wrong primer for instance a rifle primer in a handgun round. First of all it is too tall which may cause it to slightly protrude from the case and since the cup is harder it might not go off. In addition, there could be a possibility of over ignition of powder. A small or large pistol primer in a rifle round will reverse the problems. Like everything else there are exceptions.  Recently I have had two black powder rifles that have weak mainsprings and wouldn’t set off a rifle primer. Since they are low-pressure black powder arms, I used a handgun primer and everything worked out fine. I would not recommend that procedure with modern guns.

When seating a primer it must not stick out from the case, as that will cause a variety of problems. In a revolver, high primers will prevent the cylinder from turning. High primers in other firearms can cause a slam fire, which can be dangerous. Misfires and inconsistent ammo are other problems that can be associated with improperly seated primers.  When you seat a primer there should be some feel but it shouldn’t be excessive. If they are very difficult to seat forcing them in will cause some issues. If a small or large pistol primer is crushed some of the compound may come out which will cause a hangfire or inconsistent ammo because of under ignition. If there is no feel the primer, pocket might be expanded due to hot loads and the primer may fall out. Needless to say, those cases should be discarded.

Even though the primer is the smallest component of a round, it needs to be treated with the same amount of respect as all of the other components. Failure to do so will result in poor quality ammo.