Everyone who is familiar with handguns knows about the 45 auto. It is one of the most common calibers for a good reason. It works. Many companies that make handguns include the 45 Auto in their lineup, especially a variation of the model 1911. The 45 has a lot going for it including accuracy, good stopping power and if you reload, 45 auto ammo can be relatively inexpensive. It is a very flexible and isn’t picky with its loads within certain limitations. I have shot bullets from 125 to 250 grains and with the proper loads and procedures they all work well. Keep in mind some handguns are more fussy about their ammo then others. 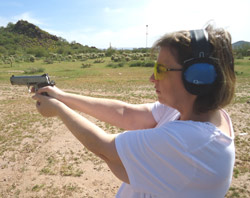 My good friend's wife shooting Ruger with reloads. She is deadly with this and most other guns.

Right now, I am doing a test and evaluation on the new Ruger Commander, which is a slightly smaller version of the 1911. It has a full size frame but a 4 &1/4” barrel as opposed to the standard 5”. I have shot this gun quite a bit with various bullets and powder plus many other 45’s that I have and still load for. The Ruger has shown good accuracy with just about everything I have shot through it including cast bullets. I have also shot a lot of factory ammo in it but the downside with factory is it is expensive, especially with premium bullets and like everything else it is hard to get.

If accuracy is your goal then you need to have good quality brass. Since that holds everything, the brass has to be consistent and tough enough to go through the rigors of reloading. For instance when you fire a round of ammo the case expands. That necessitates that when you reload the case it has to be sized to properly hold the bullet. Belling the case also puts a strain on the brass as that also works it. Poor quality brass will split or otherwise fail especially after a couple of reloadings. I do a lot of testing of various guns and ammo in many calibers so brass quality is very important to me. I can’t conduct good tests with bad brass. I study and observe brass characteristics during all of my tests. Whenever possible I get Starline brass. I have found that it has great quality in every caliber I have tried. The 45 auto is no exception. A couple of years ago I toured their plant and I am here to tell you they take quality control seriously. If it isn’t right it doesn’t go out the door. They produce some odd calibers, which I really appreciate, and their prices are very reasonable. The only problem is sometimes it is difficult to get their brass because of demand but I highly recommend Starline if you can get it.

Starline makes quality brass in calibers not offered by other makers.

So now you have your brass and once you size, prime and bell you are ready to load. One of the nice things about the 45 auto is you have a good powder selection. You want a faster burning powder such as WW 231, Tite Group, Unique, Universal, Herco, and Clays plus many others. All of your bullet and powder manufacturers have loading manuals with the proper loads and I strongly recommend you get at least two of them. I have used many of these powders and with the proper bullet, they all work well. One of my favorite loads is 7.5 grains of 231 behind a 185 grain bullet. I have tried various brands of bullets and it seems to work with all of them.

For general target shooting and plinking there are a lot of economical bullets available. Cast bullets are a great option for someone who is looking for low price ammo. They come in various weights from 155 to 230 for the most part. Some guns might be a little finicky in regards to feeding so you might have to play with the seating depth. If you have a rotary bullet tumbler that can be a big help in getting cast bullets to feed. You can tear up some newspaper and tumble your loaded ammo for about a half hour. That will polish the bullets make them easier to go up a feed ramp. Some cast bullets, especially soft ones, will grab the feed ramp and cause the gun to jam.   Another thing to look out for is the seating. Some pistols require an exact seating depth to reliably function. There are at least two good reasons to try cast bullets. They are the most economical and easiest to find and you can use a smaller amount of powder to shoot them. That is handy if you are working with a new shooter that might be recoil shy. In addition, they are usually as accurate as most jacketed slugs. If you pass on cast bullets then you are missing out on opportunities to see what your handgun shoots best. I have heard complaints about leading but if you are using quality bullets and reasonable loads, leading shouldn’t be a problem. One exception might be a rough bore. If you encounter that sometimes shooting a few hundred jacketed bullets might smooth it out. If for some reason you don’t want to use cast another good option is your plated bullets. They are swaged with a copper plating applied. While more expensive then cast slugs they come in cheaper then most jacketed verities. I use a lot of Ranier bullets in various calibers and always have been satisfied with their performance. The Berry line of plated bullets also work well in the 45 as well as other firearms. They are well worth exploring and working with. Jacketed bullets are another option. There are many types and brands so the selection is good. A good way is buy them in bulk, which applies to all of the bullets discussed. In normal times that might not be a problem but with the demand getting any of these bullets might be a challenge. Another option I do is make some of my own jacketed bullets though for the average person that might not be a viable option. I have tried Sierra, Hornady, Barnes and Nosler bullets and with the right loads they all shoot well.  I would recommend buying bulk on any components if the opportunity arises. Instead of buying a 1 lb. can of powder buy an 8 lb. keg especially if you do a lot of loading.  If possible, buy primers by the sleeve which is 5,000 as they are less expensive that way. One way is go in with a couple of friends to pool your resources. 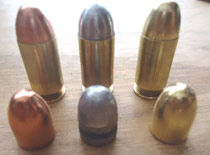 Here are a few loads that I have worked up in the Ruger. One nice thing about the 45 is it operates at low pressures and still gives good performance. There is no reason to hotrod the 45 you will only get more recoil without any benefits. Why risk damaging the gun or injuring yourself for no real gain. I am presently working with a new bullet maker on a 125 grain hollow point which shows a lot of promise. He makes some nice bullets and a handloader might want to try his stuff out when it becomes more available CMA bullets is an upcoming company. 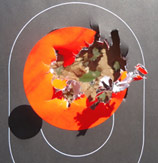 After you get done loading what can you expect from your handloads. At 25 yards with a fairly decent rest you can expect 3 to 4” groups, probably better with a good rest and shooter.    I also included some factory ammo so you have a good idea of what to expect out of your 45. Again there is no reason to exceed these loads. Another thing to keep in mind is if you use reloads to defend yourself in some areas that might cause you some legal problems so you can develop a load that is close to the factory fodder you carry in your gun and go that route.

Another friend who shoots the 45 auto well. Most loads are very controllable.

The 45 auto is a great handgun to shoot and load and everyone who shoots should have one around. In the view of many, the 1911 is the best fighting handgun ever developed and I am in that crowd.