Black powder was the only propellant for guns from the 13th century until 1886 when the French developed the first usable smokeless powder for the 8 X 50 Lebel rifle cartridge. Black powder is made from sulfur, saltpeter and charcoal in various formulas throughout the centuries. As far back as 1000 AD, China mentions black powder. There are other writings mentioning the powder from various sources from Syria to Germany. No one knows for sure but it is mentioned that guns were known in China as early as 1288. In the early 1300s guns are mentioned in various battles throughout Europe

When shooting old guns that are designed for black powder cartridges there are a couple of things to keep in mind. Frequently these guns are well over a hundred years old and aren’t getting any stronger. The designs and metal technology from the 1860s through the 1880s wasn’t what it is today. If you have an antique black powder firearm and you want to shoot it there are two things to keep in mind. First, make sure it is in good enough shape to shoot. If the action is extremely loose or it’s excessively rusty then you might want to hang it on the wall. You should also look for any tampering which might render it unsafe to fire. Sometimes they might be rechambered and I have run across that a couple of times. If in doubt have an experienced gunsmith check it out. The other thing to look for is the correct caliber. Many of the old guns weren’t marked so it would behoove you to do a chamber cast and a bore slug to ascertain the correct caliber. Firing the wrong ammo in a gun can be extremely hazardous to your health. Once you have determined the safety and caliber, you are ready to shoot and enjoy a piece of history.

The next thing is where you are going to get the proper ammo. There is no major company that loads actual black powder cartridge loads as far as I know. However, there are a couple of specialty outfits that will. For the most part you will have to roll your own if you want to shoot it. In many instances, the brass can be difficult to get especially some of the old foreign calibers. Frequently you will have to make it or buy it from someone who does. Buffalo Arms www.buffaloarms.com makes a lot of oddball calibers and I use them for some of my needs. Starline brass makes some of the old timers and their line is expanding. They make good quality brass and it can be used to make other cartridges. The 40-65 case can be used to make such black powder cartridges as the 40-60 Winchester and Marlin. The Starline website is an easy way to browse their catalog. You are not going to go to the local gun shop and pick up some 11 mm Gras ammo. Many of the American calibers are easier to find brass for as companies such as Starline make quality brass for many of the obsolete calibers such as the 41 Long Colt and the 45-90. Part of the fun of shooting these guns is the challenge of getting the brass and bullets. Anyone can walk into Wal Marts and buy some 223’s but where is the challenge to that? As for bullets, you will have to either mold them or find a specialty maker who does. Then you have to buy the dies which while can be found can be expensive. Then you have to get the powder. Since they are called black powder guns you should start with black powder. Not everyone reloads so if you are looking for black powder ammo there are a couple of places. A good source is Ten X Ammo. They load some of the old timers with black powder and their products are top drawer. I have used their ammo with complete satisfaction. For info you can go to http://tenxammo.com/ 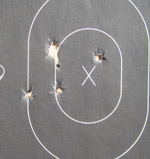 To give an example of powder fouling a couple of months ago I was doing some velocity and accuracy tests on 38 short and long Colts. I was using a S & W model 15 which is chambered for the longer 38 special round. Anyway, I shot a few dozen shorts with black powder and when I tried to chamber some longs they would not fit in. I dry brushed out the chambers and went back to testing without a problem. I then brushed the chambers again and fired some 38 special smokeless to start the cleaning process. Like all black powder guns I shoot they are cleaned with soap and water then left in the sun to dry after which I check them and lightly oil it. I am not crazy about the Arizona sun but it is good for drying guns. Is that an unconventional to clean guns? Maybe but it works for me. If the sun isn’t available for drying I use the hottest water I can get to help out with the drying process. There are many products made to clean black powder firearms if you don’t like the water method employed by me. 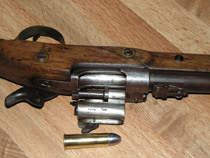 Some people like a lot of power and that is fine but it is achieved somewhat differently in a black powder firearm than something new. Most black powder loads seldom chronograph much over 1500 FPS. That is the nature of the beast and there is nothing you can do about that. Cleanshot and Blackhorn 209 will produce more velocity but not by much.. To get more power in the old smoke pole you need to increase the weight and size of the bullet. A large capacity case will increase velocity to an extent. A 45-120 will shoot a 500 grain bullet at 1500 fps as compared to the 45-70 at 1200 merely by being able to use more powder.  Another example a 45-60 will shoot a 300 grain bullet at about 1200 FPS while a 45-70 will shoot a 500 grain slug at the same velocity both using black powder. The 500 grain will hit a lot harder and travel further. I have a client who wanted to take a 500 Nitro Express black powder double to Africa and asked me to work up a load. After some experimenting and punishment, I used a 515 grain bullet at 1400 FPS backed by 135 grains of FFG powder. It was impressive on both ends and he had good results in Africa. At one time, the British had a 4 bore that shot a 4 oz slug at about 1300 FPS giving it more energy then a 460 Weatherby magnum. The powder charge was 325 to 380 grains what fun. You couldn’t pay me enough to shoot that monstrosity. They also had an 8 bore which only weighed 15 lbs as opposed to the 25 for the 4 bore. Big black powder firearms were used in the good ol U.S. with some of the bigger ones being the 45-120 and 50-140 as well as some of their shorter cousins. In spite of the pedestrian velocities, they were and are very effective rounds on most anything that walks. Big heavy, slow moving bullets hit hard and penetrate deeply. They also produce a large hole and a good blood trail. A good friend of mine used my 45-120 on an American Bison with a 520 grain at just over 1600 feet per second. He didn’t want black powder so I loaded 5744 which performs well in those rifles. I have found that 5744 is a great black powder substitute in many rifles and I kept it at black powder velocities. It is easy to ignite which accounts for that characteristic. There are some good black powder substitute powders which I will go into at a later date.  Anyway, he dropped a bull at about 50 yards with one shot and it didn’t move after it was shot. The bullet broke the near shoulder went through the heart and stopped just under the hide expanding to twice its diameter. The Bison weighed about a ton.  Some of the European military calibers were pretty potent such as the 577/450, 11 mm French Gras and the 11 mm Mauser. They like the Sharps rounds can be used to hunt large game successfully. Not a well know fact but the 303 British started out life as a black powder round. They used a heavily compressed load of 70 grains with a 215 grain round nose. The heavily compressed load was rated at about 2100 fps no doubt because of the compression and the bottle neck. I also wonder if that rating was a bit optimistic. In 1891, they went to smokeless and the 303 became one of the great military cartridges of the 20th century.

If power isn’t important there are some fine cartridges out there for you to use. A 32-40 loaded with black powder is a joy to shoot and is super accurate. It shoots a 170 grain bullet at around 1200 fps or so and at 200 yards can produce excellent accuracy. It would work fine on small game though it would be light for deer. With modern loads in a strong rifle you can safely take that 170 up to 1700 + fps but don’t try that in an old gun. The 38-55 is another fine round from the 19th century that started as a black powder round that made the transition to smokeless powder. Three cartridges that came out in the black powder era are the 32-20, 38-40 and the 44-40. They are popular because they can be chambered in both rifles and handguns. They are low powered rounds suitable for small game and two legged critters. One thing worth mentioning is that the cases made in the 1800s were frequently of the balloon type. That means that the head was thinner and the rim was hollow. That allowed a little more powder to be loaded in those rounds giving it a little more velocity. With the advent of smokeless powder, it was discovered that the balloon head cases wouldn’t always hold up to the higher pressures. 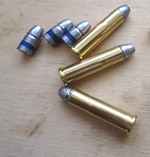 If you have a Damascus barrel shotgun and want to shoot it I would strongly advise sticking with black powder. They are a twist steel and aren’t as strong as modern shotgun barrels. Yes, I have talked to folks who use smokeless and all I say to them is its not if it will blow it up but when. You can load 50-60 grains of black powder and 1 & 1/8 oz of shot and have a good small game load. You can also load buckshot or slugs if desired but you won’t get the same velocity as modern loads produce. You can also use modern plastic hulls to good effect. There are brass hulls for those who want to be authentic or for re-enactors. A little experimenting and you can get good loads that pattern well. Pyrodex and Clean Shot seem to work well though the same isn’t true for 209 as it is harder to ignite. Black powder also makes impressive blanks in the various gauges. Back in the good ol days the 10 gauge was very popular because it held more shot and powder then the 12.

To give you an idea of how black powder and substitutes perform I am going to include some of my chronograph results. All of the loads were slightly compressed regardless of the propellant used. Note that Clean Shot and especially Blackhorn give higher velocities with less powder in almost all of the loads in the rifles. Since Blackhorn 209 gives more velocity, especially in larger cartridges it stands to reason pressures may be higher so you might want to keep that in mind.

That’s just a partial list did some of the oddballs. CS Clean Shot, PYRO Pyrodex, BP black powder. Note in rifles CS and 209 produced the highest velocities but not in the handguns. This just gives you an idea as to what a black powder firearm will do. There is a lot of potential and fun in shooting these old fashioned guns. Everyone should give it a try and you won’t be sorry you did.