Is there a more versatile cast bullet design for rifles and handguns than the age-old round nose/flatpoint (RN/FP)? Unless there are extenuating factors, these cast bullets will feed through every type of repeating firearm ever put on the market – revolvers, pistols, lever guns, and semi-auto, bolt action, and pump action rifles and carbines. It is my experience based opinion that RN/FP cast bullets, WITH ALL OTHER FACTORS EQUAL, are inherently accurate bullet designs.

In regards to effectiveness on game the proper bullet designs of RN/FP can perform as well as SWCs. It’s all in the meplate: the flat frontal area of the bullet. A small meplate causes a RN/FP to perform much like an ordinary RN on game. Large meplates are effective.

RN/FP bullets are just about as old as metallic cartridges. By my research, the first true RN/FP bullets came with Winchester’s introduction of their first centerfire rifle cartridge. That was the .44 WCF (.44-40). Its origin was due to safety concerns in tubular magazines. As evidence of that take a look at old cartridges or old cartridge drawings. If a cartridge was intended for a repeating CENTERFIRE rifle or carbine its factory loads contained RN/FP bullets. Some shooters poo-poo the danger of cartridges igniting in lever gun magazine tubes. It is a rare happening today but think about a time when primers were brand new items. They were not so risk free or stable.

One of the best modern RN/FP bullet designs was introduced in 1987 by RCBS with the number44-200FN. It is nominally a 200 grain RN/FP with a single wide grease groove and then a crimping groove located at the precise point so that when properly seated in .44 WCF (.44-40) cases overall cartridge length is 1.575 inch. It has been used by me on game up to the size of deer and I have seen no sign that it gives up anything to SWCs. When handloading .44 WCF for my own purposes (as opposed to writing articles) it has been the only bullet used for nearly 25 years. 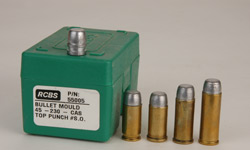 In respect to handgun cartridges I feel that another RCBS mould is at the top of the heap. That is #45-230CM (cowboy mould) nominally for a 230 grain cast bullet with one big grease groove and properly placed crimping groove. Somebody at RCBS was thinking when they decided on 230 grains for this design. Most other .45 caliber handgun RN/FP bullets weigh at least 250 grains, making them too heavy for any cartridge besides .45 Colt. From my RCBS #45-230CM mould that same alloy results in 233 grain bullets or 224 grain ones when poured of Linotype. One or the other alloy is ideal for .45 ACP, .45 Auto-Rim, .45 S&W “Schofield”, or .45 Colt of course sized .454, .452, or .451 inch as needed.

When first viewing RCBS #45-230CM one gets the impression that it is far more a flatpoint than a Round nose. Its meplate is .40 inch wide, the broadest of any RN/FP I know of. One cannot help wondering if feeding problems would arise with repeating rifles or semi-auto pistols. For me there have been none, even to the point of rattling them through a full-auto “Tommy-gun.”

While on the subject of RCBS RN/FP bullet designs their #40-180CM also rates high for versatility. It is their offering for .38 WCF (.38-40), which of course actually takes .40 caliber bullets. Again my usage of it has spilled over from revolvers and lever guns to semi-auto pistols. It is also suitable for .40 S&W and 10mm Auto. And again it gives superb accuracy and complete reliability.

There are a vast number of other fine RN/FP bullets about. When not casting my own for .38 WCF/.40 S&W, the ones from Magma Engineering’s mould  and offered by numerous custom casters work perfectly. Hornady is even making swaged lead RN/FPs in .38, .44, and .45 sizes. My only handloading experiences with them have been with their 205, .427 inch version in .44 WCF, and the results were good. Quite often people ask me for my recommendations on cast bullet designs. When the task isn’t specialized the RN/FP is my primary “go to” choice.