The .358 Winchester: Still A Major Contender

A well-used and well-loved Browning BLR lever action rifle in .358 Winchester. It seemed to love Doubletap’s 250 gr. Jacketed Soft Point ammunition. Doubletap is one of only a handfull of manufacturers who still load .358 Winchester.

In 1977, Ron (pictured with his deer) purchased a new Browning BLR lever action rifle chambered in .358 Winchester to hunt native deer in his home state of Louisiana. At the time, he used factory Winchester 200 gr. Silver Tip ammunition, although he felt they didn’t give him the results he anticipated. Time passed and so has his techniques for hunting deer, but one thing has remained the same, the rifle or, “old friend,” as he tells it, carried on every hunt. He stated that he has used his Browning for almost everything a rifle wasn’t meant to be used for, but when it came time to pull the trigger on that Browning boat paddle, the .358 Winchester it was chambered for always ended the hunt.

The story of the .358 Winchester cartridge begins in 1955, 22 years before Ron made his choice in a new deer rifle. The ballisticians at Winchester began with their .308 Winchester case and necked it up to accept .358” diameter bullets. The resulting cartridge was designated the .358 Winchester. It’s first chambering was the Winchester Featherweight Model 70 bolt-action rifle, a year later in their Winchester Model 88 lever-action. Regrettably, after 43 years of service, it fell out of favor and was suspended in 1998. As with many great underrated cartridges, no one knows why exactly. Some speculate it may have fallen victim to the magnum craze because people believed at the time, (and some still do), that any shortcoming they think a cartridge may have can be fixed with the application of more powder.

Modern hunters and handloaders who own and load this caliber know that this was and still is a very viable short to medium range cartridge. It can easily handle almost any game in North America with the application of the right bullet. They also know not to believe everything they read or hear, because sometimes a cartridge’s demise is based on misrepresentation of the facts or a mere misunderstanding as I feel it was with the .358 Winchester. The term “gone but not forgotten” still applies today and with the introduction of new factory .358 Winchester brass to Starline’s lineup, handloaders can now breathe new life into this great cartridge.

The .358 Winchester is the little brother to the 35 Whelen, which uses a necked up 30-06 case. Over the pond, the .358 Winchester is known by the millimeter designation, 8.8x51mm. Original factory ammunition was loaded with 200 and 250 gr. bullets, but if you handload, not only can you load the .358 to your liking, you also have the option of using .357” pistol bullets for smaller game. These loads are covered in most reloading manuals that include loading information for the .358 Winchester. One such load starts with a 158 gr. Speer UCHP and a starting charge of 48.0 grains of IMR 4064 that generates a muzzle velocity of about 2496 ft./sec. 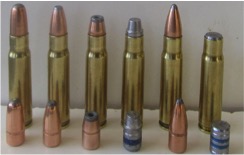 Factory ammunition is still available, but limited to companies like Hornady and DoubleTap, but not Winchester, which I find amusing. This is why handloading is so important to those of us who don’t follow the main stream and find solace in older cartridges like the .358 or just find custom loads more satisfying. Earlier I mentioned that Ron didn’t find the factory loads he was using to be satisfactory. He needed a better load, something at the time only handloads could provide, so he did his research and found Bob Shell. Bob Shell is my mentor and has handloaded rare, obsolete and wildcat cartridges for over 30 plus years and when Ron told him his problem, Bob had the answer. He loaded Ron a custom load utilizing a 200 gr. Hornady Soft Point with 48 grains of 4895. The 200 gr. Hornady left the barrel at 2438.0 ft./sec and his deer hunting dilemma was resolved.

Since the .358 has not found new interest (at least not yet) in the mainstream market, handloading is the most viable way of obtaining the loads you need. I find that loading and shooting ammunition I’ve produced gives me a greater understanding of the shooting sport I love. Here are a few useful pieces of information to make your reloading session go a bit smoother. Start with Starline’s .358 Winchester brass and run it through a set of RCBS .358 Winchester re-sizing dies. If for some reason Starline is sold out and you need ammunition now, use their .308 Winchester brass and neck it up using the same resizing die. Make sure you lube the outside and inside of the case, less is more when it comes to case lubes. Excess lube could cause your case to deform and render it useless, so go light. Since I’m speaking from experience, failing is very educating.

The cartridge on the right is the .358 Winchester as compared to the standard .308 Winchester it is made from. As you can imagine, the 250 grain bullet hits hard and ends the hunt quick.

Bullets are easy to obtain as well. Almost every bullet manufacturer carries a .358” diameter bullet in their inventory such as Hornady, Speer, Barnes and Nosler. Of course, there are also specialty bullet manufacturers like Hunters Supply (www.hunters-supply.com) who produce lead bullets of varying hardness. Working up the ideal load takes experience, patience and most importantly time, but as I’ve heard people say, “getting there is half the journey.”

Rifle powders are also readily available. One of my favorites is Hodgdon H-4895. Of course, I’m a bit biased in this aspect as I count Chris Hodgdon among my friends. Other powder choices include, IMR 4064, 4320, 4895, Reloader 7, 748, Viht. N133 and AA2015. This is just a sampling of the powders you can use. Your reloading manual of choice will fill in the gaps. Just remember that every bullet has a powder or recipe that will make it a great load and shoot well in your favorite rifle. There are consequences in using the wrong powder and bullet combination resulting in undesirable effects, so prudence requires great attention to detail with no distractions. This will result in a great handloading experience.

The .358 Winchester has even been chambered in the AR-10 platform, supplementing the performance of the standard .308 Winchester. Several companies are producing barrels and some higher-end companies are producing complete rifles. This is a caliber I would love to have in a MSR (Modern Sporting Rifle). It would fit and function in any standard Magpul .308 magazine and be a great addition to any outdoorsman’s hunting arsenal.

If you are a traditional sportsman and/or hunter, Browning still manufactures the BLR’s in four different models chambered in .358 Winchester (http://www.browning.com/products/firearms/rifles/blr/current-production.html). You may also be able to find and purchase the Winchester Featherweight Model 70 bolt-action rifle and Winchester Model 88 lever-action on sites like (www.gunbroker.com). Be aware these are limited and seldom come available, but every once in a while, someone may part with one. The price will most likely be steep, but I feel you will get a lot in return.