History of the .308 Winchester

Heading Down Range For Over 64 Years

November 11, 1918 marked the end of the First World War and the U.S. Ordnance Corp wanted a smaller cartridge to replace the 30-06 Springfield. Like all government undertakings, by the end of the Second World War, the engineers at the Frankford Arsenal had begun to experiment using the 300 Savage case. In 1952 the .308 Winchester or .308 WIN had become a reality and for the military, the cartridge designated, Ball, Cal. 30 T65 was ready for testing. The performance of the experimental round could not match the power of the 30-06, but a series of modifications led to an improved cartridge designated, T65E3 7.62mm NATO on December 15, 1953. The U.S. Military adopted the improved cartridge in 1957 and it was chambered in two of their newest weapons, the M-14 rifle and M-60 Machine gun. The cartridge and both weapons were well received by soldiers.

During this time, Winchester introduced the .308 Winchester to sportsmen and chambered it in their bolt action Winchester Model 70 rifle. The shooting public was hesitant at first in accepting this new unproven hunting cartridge because it lived in the shadow of the 30-06 Springfield. They say time heals all wounds and today it’s hard to find a firearms manufacturer that doesn’t offer at least one firearm chambered in .308 WIN in any action you care to name. With its heavy use by the military, benchrest, highpower, long range, silhouette, 300-meter international matches and as a premier hunting cartridge, it has grown to be one of the most accurate and widely accepted cartridges in the world with a great future.

Although very similar to the military 7.62×51mm NATO cartridge, the .308 Winchester cartridge is not identical because the brass is thinner and they are commonly loaded within normal pressure specifications, whereas the 7.62x51 NATO cartridge brass is thicker and loaded hotter (higher chamber pressures) for military use. The Sporting Arms and Ammunition Manufacturers Institute (SAAMI) does say that they can be used in either military or civilian chambers safely, but many firearms manufacturers suggest that you not feed a .308 Winchester sporting rifle a steady diet of 7.62×51mm NATO, as it may cause excessive wear and damage because the chamber is not designed for sustained use of these higher pressure cartridges. The .308 Winchester has also been used as a parent case to develop other cartridges. These include the .243 Winchester, .260 Remington, 7 mm-08 Remington, .338 Federal, .358 Winchester, .307 Winchester and the .356 Winchester.

As far as reloading is concerned, Starline now offers .308 Win cases and plans to soon produce other cases from the .308 family. Every major reloading company carries dies as well as specialty equipment to help make the process easier and faster. But there are a few simple things to remember that will make your reloading experience with the .308 Winchester even better. When using range-recovered military brass, the charge shown should be reduced by one to three grains to compensate for the thicker construction of the brass case. Military brass is generally hot and the cases are made thicker to contain the higher pressures. I choose not to use steel cased ammunition in any of my rifles. Manufacturers I have spoken with advised against it warning it will erode the chamber and wear on parts if the firearm is fed a steady diet of steel cased ammo. Since it’s not reloadable, if I encounter it on the range I gather it up and sell it for scrap. Leave no trace.

Generally, when loading for a bolt action rifle, a normal full-length two die set consisting of a full-length sizer die with an expander-decapping unit, and a seater die with bullet seater plug will handle the job. In some cases, as with semi-automatics like the .308 caliber AR rifles, lever action and pump action rifles, you will have to use a small base two die set, consisting of a small base sizer with an expander-decapping unit and regular seater die with Seater Plug. The sizer die resizes cases below SAAMI minimums, reducing the shoulder and body by a few thousandths assuring proper functioning in these tighter rifle chambers like semi-automatics. My Springfield Armory SAR-4800 (a clone of the FN-FAL) has a match chamber and will not chamber ammunition loaded with normal full-length die.

Trimming may be necessary even after one firing depending on the manufacturer of the brass and how hot the load was. There are many case trimmers on the market. I prefer the RCBS Trim Pro 2 Manual Case Trimmer mounted on a RCBS Case Trimmer Stand powered by my cordless drill. The Trim Pro uses a spring-loaded universal shell holder that accommodates cases with .250-inch to .625-inch rims and standard caliber specific pilots. The stand holds two spare cutter heads and 18 pilots as well as 5 shell holders for the original trimmer. For all my .30 caliber case trimming I use the RCBS Trim Pro 3-Way Cutter. It has a unique three-blade head configuration that trims cases like the standard cutting tool. But in addition to trimming to length, the inside blades chamfers (cut away at right-angled edge) the case while an outside blade deburrs it, saving you a lot of time and hand cramps.

Powder choices are abundant for loading the .308 Winchester starting with one of my favorites, IMR-4895; it is so universal with other military cartridges of this type. The list is extensive and based on the bullet you’re loading, but any reloading manual, both print or online, will have a great selection for you to choose from. Bullets generally range from 100 grains to 208 grains depending on the bullet manufacturer and depending on what you want the cartridge to do. You can load down with a 110 grain bullet and have a great varmint load and load up to a 180 grain bullet for mule deer. My hope is I have imparted you with a few new things you didn’t know and given you a good base to start from. There are many aspects to reloading and it takes time on the press to learn them all. Never be afraid to ask someone you trust or call the manufacturer. Companies like RCBS are glad to help you. In summary, one key point I want to make is the .308 Winchester has been around for 64 years and I’m sure it will be around for many more.

The Fabrique Nationale - Fusil Automatique Léger ("Light Automatic Rifle") or FAL as it’s also known, is considered one of the top 10 battle rifles in the world. But what if the .308 Winchester never was, would the FN-FAL have ever been invented? I’m so very glad it was, the FAL is one of my absolute favorite rifles and when those 7.62mm rounds speak, people listen, even from a long way away. 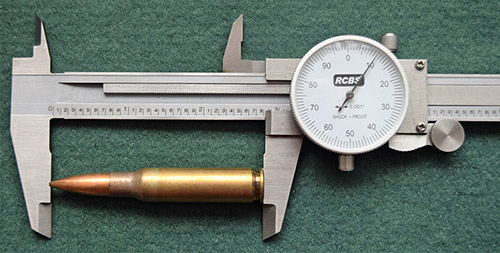 Max OAL: (Max Overall Length) 2.810” This is very important when feeding from a magazine. Load several into the magazine and make sure they feed. This should be done with the rifle as well to make sure they chamber easily.

After you have trimmed your cases back to the proper length of 2.005”, it’s time to prime your cases, pick your powder and choose your bullet. This is generally based on what you want your .308 Winchester to do. 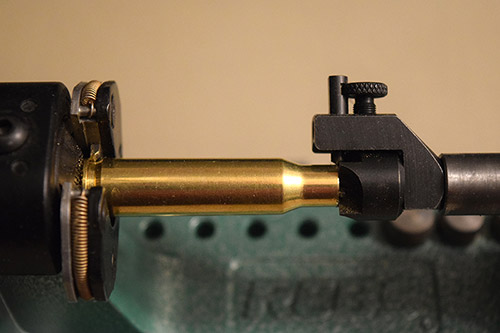 Trim-to-length: 2.005” This can be easily done using the RCBS Trim Pro 3-Way Cutter, which trims to length, chamfers and deburrs the case all in one step. This saves you valuable time during the reloading process and allows you to move on to priming and reloading.

Always develop a routine for reloading. It keeps you on track and speeds up the reloading process while remaining safe. A double charge of pistol powder could ruin your shooting experience. 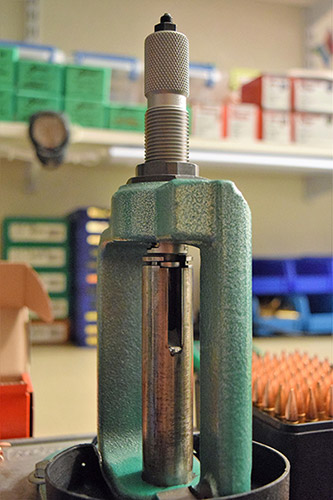 Something that is hard to explain to the non-loader is that this is a, “by feel,” hobby. You can’t see inside the die so you learn to reload by feel, and how to make adjustments to get a desired result.