We received this article unsolicited from one of our customers. We enjoyed reading this and wanted to share it with you. We can all relate to the author’s pistol fever.

We all make mistakes. They come in all shapes, sizes and quantities. I ought to know, since I just made one. So, please, let me confess: I spent too much money on a pistol. Which, in order to get, I needed to trade a pistol of mine. And additional money. Did I mention that the pistol was perhaps not in the best shape, either?

This most recent mistake, which still slightly stings when in my present memory, started out innocently enough – I decided to go to a gun show and see if anything struck my fancy. After wandering the aisles of merchandise – everything from paper magazines to metal, bullets to powder, and hammer to trigger – I saw it. On a pawnbrokers table it lay, nestled up against other used revolvers and semi-automatics – a Ruger Super Blackhawk in .44 Remington Magnum. These are not especially rare pistols and I have seen them many times before: new in stores, at the range, and at gun shows. Until this particular moment, I had no desire to have one. But, this one I did. I’d like to tell you I examined it closely, but I didn’t really, other than to pick it up and feel the heft. It did not disappoint – it was heavy, as expected. 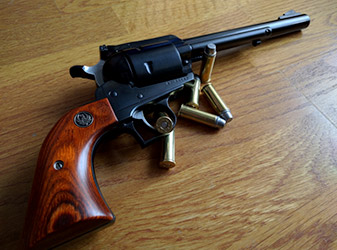 In order to prevent myself from getting gun fever, I normally do what one should – cool your heels, stop, and think. I decided I would go home, check the Blue Book of Gun Values, check as many forums as I could about this particular pistol and, if I still felt that I wanted it in the morning, I would select one of my flock to trade, with the idea that I would spend a little (a little!) to help make the trade happen and go back to the gun show and stand my ground until I got the best deal I could.

It did not happen quite like I envisioned. My resolve crumbled like so many crackers crushed up for chili that is so filling in the cool weather we have in winter – I could feel myself saying I might do anything to have this pistol as I got closer to the doorway. What I believe happened is this: I’d like to be able to tell you that the gun spoke to me; and I suppose in a way it did, but not how one might expect.

In the poor lighting of the rented hall, built back when people socialized in person and not, as if by magic, thru the wireless ether of today, lay this poor and blighted .44 Magnum. I suppose I felt sorry for it, like Charlie Brown did for his Christmas tree. I could not see all the faults because I did not wish to. I ended up paying twice what I originally considered spending.

What I first thought was a slightly dirty handle was in fact almost in the white from use. The front sight? It is slightly crooked. I’m not going to talk about the scratches in the stocks, save to mention that my cat looked upon them fondly, as if they were the work of her kind.

Desire has a way of fooling you in the darkness. Just like nearly everything else.

If I did not know why I was drawn to this particular pistol at first, I shortly may have figured it out when I was downloading the manual from Ruger’s website after I returned home. This Super Blackhawk had been made in the year of my only, and baby, brother’s birth. He is not with the living anymore and I certainly do not believe I was divinely inspired, though it is often said that God looks after fools and drunks. I don’t recall anything in that saying about looking out for folks who get pistol fever… or maybe I just would prefer not admitting I was a bit of a fool, because I was completely sober when I purchased this pistol.

The story could end here, and we all would nod our heads and say, “yes, I’ve done that too!” But it was my next move, while if not redeeming, certainly put me on the path towards it. I made my way to a local purveyor of ammunition who just happened to have some freshly manufactured cowboy action type loads for the .44 Mag. I purchased them at what I thought was a fair price only after I saw that the cases themselves were Starline brass. If I was going to make the most of this pistol, I knew that a clean and bright start would have to include great brass. In fact, the brass may have been the nicest part of ammunition this pistol has ever seen.

After taking the wheel gun for a spin, pardon the pun, at the indoor range with my store bought ammunition, it was time to get to the work of developing the right load for me. Elmer Keith certainly had a lot to say about this particular round and much of it remains true today. Like all good reloaders, I was going to start with a nod to the old man in terms of bullet weight and maybe powder choice, but for this pistol I was going to use nothing but the best brass. I do not know if Elmer ever used Starline brass, but I’d like to think he would approve of my choice.

I took the empties I had so carefully kept, quickly deprimed them, and ran them in a bath with some stainless steel pins, along with a cleaning brew. They came out looking like I had just received them fresh from the factory. While they dried, I researched the manuals – old and new – and elected to stay with that grand old classic, Alliant 2400. I never went as far as the standard Keith load; I am punching paper and not hide and bone. But I did load six up that would have been the modern reproduction of Keith specifications, and with the comfort of ear plugs, ear muffs and the best polycarbonate lenses one can have made, I put the sights of this old, mistreated Super Blackhawk, pistol up on the target at 25 yards away, gripped it just so and made the motions every marksman makes to hit the target downrange. Just breathe and squeeze.

After the roar of the pistol finished, the entire indoor range went silent, its cadence broken, for a moment wondering what sort of thunder lived inside lane three. I wondered, too.

The brass ejected easily and without trouble. It was not as clean as when it had entered the chamber, but really, that did not matter. The holes on the target were of great comfort to me and I like to think the gun was happy with my choice, as well.

I do wonder if I really made a mistake after all? If spending a little too much money on a pistol was the worst mistake I ever make, well, aren’t I really ahead on the cosmic mistake scoreboard? One thing is for sure, though – I did buy the right brass – and that seems to have taken quite a bit of sting out of the mistake that has brought me a not unsubstantial amount of joy this year.

Let us all hope that all our mistakes have happy endings. Mine did, and I hope yours does, too. 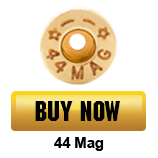