Personal Defense: Hang On to Your Gun | Handgun Holsters

It is often said that the first rule of a gunfight is to bring a gun. That’s all well and good but have you ever reached for that handgun holster and experienced the most horrible feeling on earth as your hand closed around thin air?

Regardless if you’ve had that experience or merely had a bad dream about a similar circumstance, let’s talk about handgun retention. Our goal is to keep you in positive contact with the operational part of the firearm while the end with the big hole is facing towards our dirtball du’jour.

This topic is often discussed, occasionally practiced and mostly forgotten. However, when you consider that a quarter of the police officers killed in America in 2003 were killed with their own weapon, it is obvious that retaining possession of your own firearm is a pretty important idea. 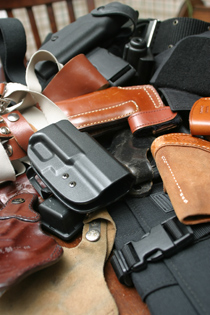 There are hundreds of handgun holster designs to choose from.

Weapon retention starts with the holster used to carry your firearm. This is most commonly a belt rig rated using the 1-2-3 security grading system developed by a major holster manufacturer. A level-one system is very quick during presentation, easy to use, often less expensive and relatively insecure while a level-three system requires a password, background check and official blessing from Hillary Clinton before the gun can be released from its enclosure.

Which is best? The simple answer: all and none. A level-one system, the vast majority of handgun holsters in use today, can be very safe if you use good body positioning and proper spatial awareness. A level-three system might be worthless if you are very careless. It also features the additional bonus of being slower to present the weapon if you don’t regularly practice. Pick your poison.

Notice that we used the dirty word “practice.” Regardless of your holster or carry method, you can’t blame the gear if you don’t regularly practice and then happen to be just a shade too slow in drawing after being surprised in some dark alley. The quick-draw is still an important basic gun handling skill so make sure you can do it even if your holster is one of those that requires a magic wand and short voodoo ceremony prior to releasing the retention system. 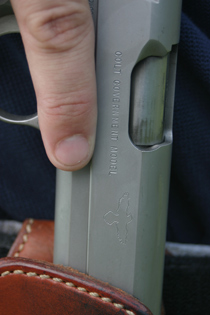 A Colt 1911 pistol is presented from a quality level-one handgun holster.

One big area of concern often overlooked is accidental loss of a handgun. This is ignored because nobody is so stupid as to lose their gun from the holster while running, jumping or bending over, right???

Trust me; it is quite possible for your weapon to fly out of even a high-security handgun holster if the fates are properly aligned. Now, after conducting a foot chase several years ago with an empty holster after stumbling in high weeds, my hand reflexively checks the security of my weapon every time I exit a vehicle or walk through on a door. You should train yourself to do likewise.

Guns are frequently snatched from the handgun holster in spite of security devices so it is vital to have a good plan in mind should someone attempt unauthorized removal of your weapon from its carry place.

Of all the handgun retention techniques that I have tried and seen demonstrated, the simplest yet most effective is to put both hands over the weapon and/or hands of the assailant and push down firmly. When we say ‘firmly,’ we mean applying enough force to drive the muzzle through the pavement. Simultaneously, you will begin to violently spin, kick, squirm, head-butt or use any other method at your disposal to convince the potential murderer that they aren’t that interested in your weapon after all.

Having tried this many times, I find that it works well because it is simple. There are no complicated moves to memorize or practice so it is very fast even if you haven’t rehearsed recently. The key is to use both hands, regardless of distractions such as flailing fists, in order to prevent the weapon from ever leaving the holster. 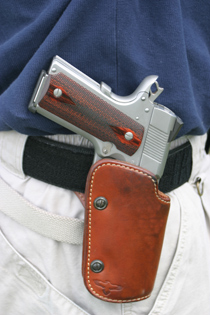 Keep in mind that such violent maneuvers will often tear or even drestroy a lesser-quality holster or belt. This is another compelling reason to spend more than $15 for a carry system for your prized $1000 handgun.

Retaining an unholstered weapon begins with good muzzle discipline. If you lead with the muzzle of a gun while searching, it becomes a simple matter for someone around the corner to grab the barrel before you have even entered their personal space. “Holding” someone “at gunpoint” is another good way to get your weapon taken away if you are too close (and a great way to unintentionally kill your prisoner if startled by a loud noise).

If your weapon is grabbed while unholstered, there are several possible response tactics. My favorite technique (again due to simplicity) starts by violently pulling straight back on the weapon with great force and speed. This usually causes the assailant to relinquish the weapon in their surprise if done with aggressive and unexpected violence.

If they are still holding onto the gun at this point, you drop to one knee. This will cause the barrel to point squarely at the chest region of the suspect; we assume you can figure out the next step.

In such scenarios remember that your pistol might only shoot once and then experience a malfunction; be prepared to clear the problem and keep shooting.

When using any retention technique, consider it as a deadly-force situation because the suspect isn’t planning on an afternoon of plinking if she gains control of your weapon. Use any means available, with all the violence you can muster, to retain possession of your weapon.

Once you manage to disengage from the attacker with your firearm, create distance and then take whatever actions are appropriate. Hopefully your attacker has retained at least a modicum of good sense and will comply with your commands.

If not, at least you brought your gun to the gun fight.

About the author: Lt. Brent T. Wheat is a full-time law enforcement officer with over 25 years of experience on the street. As a former SWAT Sniper, Detective, canine handler, rescue diver and shooting instructor, his widely-read personal defense writings have appeared in a variety of national publications.