Some of us play with guns that have rare ammo isn’t available for which makes them more interesting than the newbies. They are long obsolete and may have never been popular in the first place. One option is to not shoot the gun. That of course isn’t a viable option to me unless the gun is unsafe to shoot. Anytime you shoot an old gun it should be checked out for mechanical safety. When you make brass for any gun, make sure you are using the correct brass. For instance if the body is too small you will risk a case rupture which can be dangerous.

Until recently you had a hard time getting 303 Savage brass though that has changed. In order to make ammo you needed either a 303 British or 30-40 Krag case. They would have to be shortened, body swaged to proper diameter and some rim work to make it work ok. The model 99 Savage is a very durable rifle and there are quite a few still in existence that are shootable.

The Winchester model 86 rifle came out in various calibers that are long obsolete. One of the more popular calibers of that period is the 40-65, which was a popular hunting round for many of the large game species. Happily, Starline makes cases for it as well as some other rare ammo types. Winchester also chambered the 86 in 33 Win and 38-56 neither, which is easy to find ammo for. If you have the loading dies for those calibers then you are in luck. Starline 40-65 cases are easily made into those rounds. I just size them in the approximate die and you have a case. Just check for length though it isn’t usually necessary to trim but you should chamfer the case mouth and load as usual. You can use 45-70’s for this operation but you will definitely have to trim them to make ammo. 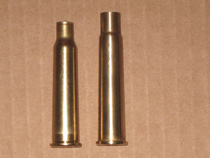 Many of the European calibers are very difficult to find so case forming is necessary. The 6.5 X 53 Dutch is a perfect example taking it off the wall and one of my favorite carbines. The rifle is well made and the effort to make ammo for it is well worth while. I take a 303 British and shorten it to the correct length then run through the full length sizing die and you are ready to load. It takes standard 6.5 mm bullets although the heavier ones tend to be more accurate. When you get into the black powder military rounds things can be more difficult. For instance, the 11 X 59 Gras and 11 X 60 Mauser are long and large bodied cases sometimes the 348 case is the parent one to use. There are specialized methods employed and you might be better off buying formed cases from a supplier such as Buffalo Arms or Bob Hayley. The 11 mm Montenegrin is a large military handgun employed by Austria and other countries. There are several variations so you need a chamber cast to determine which one you are dealing with. Frequently the 45-70 case is the way to start. The last batch I made required trimming and tapering which can be difficult without the correct dies.  When available I use Starline brass because of its good quality and pricing it works the best for me. When you make your own cases there can be some brass loss which is expected. Good quality brass mitigates that to an extent. If I make 33 Win from 40-65 cases loss is less than 1% which I can live with. With 38-56, the loss is about 0%, which is my favorite number in this instance. 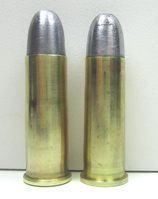 The 8 mm French Lebel revolver and the 7.5 Swiss rounds are made from 32-20 brass. You trim to length and size and you are ready to load. Again I use Starline because of price and quality.  Another real oddball is the 9.4 Dutch revolver. I take 41 mag brass and size it then trim it to the proper length. It’s not real hard to make as long as you have the correct die which is essential in this instance. The bullet diameter is also odd at .380 so you will have to make your own or find someone who makes that particular rare ammo. The Bodeo was the Italian military pistol for some years from the 1870’s to the earlier 1900’s.  You have to take a 44 special case, shorten and size it. It takes a .422 diameter bullet so you need special sizing die as well. A 44 special die won’t size it enough to use the correct bullet.  I size a 180 or 200 grain cast 44 bullets for a projectile.

Another project I recently did was to make some 40-70 Sharps bottleneck ammo. Since I didn’t have the correct dies I took some Starline 45-70 brass and sized in a 40-65 die until it would chamber. Then I fireformed the case, using a cast .408 bullet which completely formed the round. I used a 41 mag die to size the neck and  the 41 bullet seating die to complete the operation. The case body didn’t require sizing as I was using low pressure smokeless loads and cast bullets. Since I wasn’t making a large amount of ammo I didn’t see any justification of buying the correct dies for the case forming. In honesty the right set would have made it easier to make the brass and if the rifle was mine I would have purchased a set.  Fairly frequently if you use your imagination you can use a set of dies not intended for that particular round. I shorten a lot of my dies so they can multitask.

If you make 219 Zipper cases from 30-30’s you need to do it in steps. I set it up so the first step is sizing in a 25-35 die. Then I put in a 25 caliber reamer and set the trimmer to get my length. You need to thin the neck because it gets too think which will cause hard chambering and dangerous pressure. A thick neck can’t expand allowing the bullet to move in the normal way. You then size in the Zipper die and after chamfering you are ready to load. If you neck down a case by much be prepared to thin the neck. One way to determine if the neck is too thick a fired round won’t allow the bullet to drop in through the neck. While not 100 % accurate, it can be an indication of a thick neck. If you have the specs that can be a big help. If you have an original round that can be used for measuring.

There are things you should consider when you decide to make your own brass or bullets. Frequently it takes special tooling, which may be costly and hard to get. If you don’t plan on shooting the gun more then a few times consider buying the rare ammo instead of case forming it. Some of the ammo is difficult and time consuming to make so you need time also. Attention to detail is paramount to success.  Many cases require that the rim has to be thinned and turned down and unless you have a lathe or similar item then you are in for a hard time. If I am doing only a few, I might put in in a drill and use a file to fix the rim. I don’t recommend it for a large batch of ammo. I use a Forrester trimmer powered by a drill for case trimming a task, which is needed about 95% of the time. Sometimes I have to rework a pilot or a cullet for s specific task. You might have to remove the rim and cut an extractor groove for example making a 351 Win case out of a 357 maxi.  Occasionally you might have to anneal the case to prevent excessive loss. Annealing softens the brass, making it easier to work with and prevents splitting. Do not ever anneal the case head as that will weaken it, causing a dangerous rupture. Making your own cases can be rewarding but you need the proper knowledge and tools. Like reloading there is a sense of accomplishment when you make ammo. There is some info out there but some is sketchy and inaccurate so be sure you are on the right path before committing a lot of brass or time. There are many more cases that I make but it would take a book to list them all, a project I am working on.