There is some confusion today among the general public about what an AR is. The mainstream media often refers to AR’s as assault rifles, which is inaccurate. The AR in “AR-15” rifle stands for ArmaLite rifle, after the company that developed it in the 1950s. “AR” does not stand for “assault rifle” or “automatic rifle.” AR-15-style rifles are not “assault weapons” or “assault rifles.” An assault rifle is fully automatic, a machine gun, and has been severely restricted from civilian ownership since 1934.

The NSSF has a great reference source available about ARs (Modern Sporting Rifles) at https://www.nssf.org/msr/.

The truth is, the AR offers a wide range of utility such as competition shooting, self-defense applications and hunting. The accuracy, portability and the ability to hold the scope steady on subsequent follow up shots serves especially well for predator and hog hunting. Hunting with an AR-15 is growing in popularity and is becoming a common choice for everything from rabbits to big game.

Before preparing to hunt with an AR, know your purpose and local hunting laws. Starting here will guide your accessory choices and general setup. Many states outlaw lights, lasers and sights with lighting, especially for big game hunting. The laws for nuisance predators and invasive species are often more lenient. The AR-15 is ideal for most small game and predator hunting applications.

Numerous calibers are available in ARs and the standard .223/5.56 works great for hunting everything from coyotes to rabbits. The AR-10 is a step up when larger calibers are needed to handle big game and hefty targets. You can carry multiple uppers for either platform and swap them out to change calibers as well (they are not interchangeable between platforms however). This flexibility is unique to the AR, making it the most versatile rifle around. It literally takes seconds to swap your coyote upper to a deer upper on your AR-15. Minimal recoil, especially in the .223, makes an AR rifle friendly for youth hunters and smaller-framed individuals. 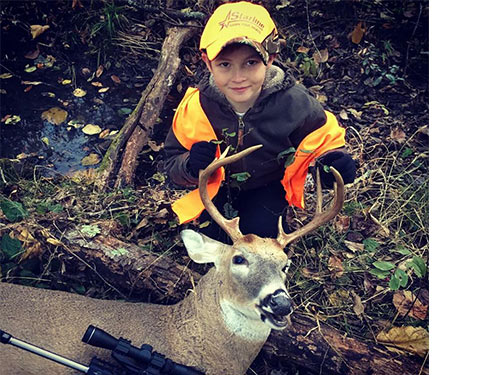 The standard AR-15 caliber is the .223/5.56x45mm and it works well for small game and predator hunting. There is ammunition available for the .223 built specifically for deer hunting that penetrate well at close ranges. These deer-specific loads work well for whitetail hunting in tree-stands and blinds. The low recoil and easy handling make those rounds ideal for smaller individuals and youth hunters. The .450 Bushmaster, .458 SOCOM, .50 Beowulf, .277 Wolverine, 6.5 Grendel, .6.8 SPC and .300 Blackout carried by Starline Brass are excellent deer calibers as well. While not flat shooting cartridges by any means, the .458 SOCOM, .450 Bushmaster, and .50 Beowulf are large enough for any of North America’s big game and most of the rest of the worlds’.

Big game hunters can use larger calibers on the AR-10 platform and effectively hunt everything from whitetails to elk. The standard AR-10 caliber is the .308, but 6.5 Creedmoor, 7mm-08, .338 Federal, .243 and a number of other AR caliber options are also available and are viable options for hunting big game with ARs.

Building Out your AR

The Picatinny Rail is one of the greatest inventions in modern firearms. The rail system makes it easy to mount scopes and accessories with a simple track and lock system. The options are endless with the ability to add bipods, custom sights, etc. For general hunting purposes, a solid scope will suffice. Also go with a free floating handguard to maintain grip without influencing the barrel or accuracy. Stocks and grips are a matter of personal preference.

Collapsible stocks are great for packing while adjustable stocks make it easy for multiple individuals to use the rifle effectively. Adjustable stocks are also great for youth hunters. You can set the stock to minimum lengths then adjust as needed for growth each year. Having a comfortable rifle that will last from childhood to adulthood is convenient.

Major Advantages in Hunting with AR’s

Flexibility, accuracy and durability are the big wins with an AR rifle. Predator and small game hunters can also track easily and deliver multiple rounds in fast order. This plays really well with moving targets like rabbits and coyotes. A group of wild hogs can also turn on you and firing quickly and accurately is a necessity at times. Ideally, you will deliver a single kill shot, but having a stable scope to deliver follow-up shots quickly is something bolt and lever action rifles simply do not provide. The lack of steel also limits the potential for wear from rust.

Most AR components are mass produced and easy to acquire, and the platform will likely be around for a very long time. Many hunters will continue using bolt and lever actions in common calibers that have been and will continue to be around forever. It’s hard to beat a trustworthy 30-06 or .308 bolt-action rifle for big game hunting. In the end, it really is a matter of personal preference and your ability to handle and shoot the rifle in the field.