The History of Wildcat Cartridges

Designing a cartridge – even tweaking a classic – puts you on the path of handloading pioneers!

The term may have sprung up in the oil fields. Following the Civil War, whale oil had become so expensive, the U.S. government subsidized exploration for petroleum – whose price vaulted from 35 cents a barrel in 1862 to $13.75 later that decade. Wildcatters drilled where oil hadn’t yet been discovered. John D. Rockefeller focused instead on refining and transporting it. Standard Oil Company took root in 1870. The industrial age also brought labor unions and – outside the purview of unions – wildcat strikes.

The first cartridge called a wildcat probably dated to that time. Adoption of the .30-06 by the U.S. Army a decade into the smokeless era introduced soldiers to what many thought the only cartridge hunters would ever need. But to inventive shooters, the ought-six was raw material. They changed its dimensions, then handloaded for re-barreled Springfields and other infantry rifles surplused at ridiculous prices.

Why wildcat cartridges? Now, as a century ago, shooters can use convenient factory loads in common rifles – or they can chase performance by “rolling their own.” Motorists buy cars; automobile enthusiasts build hotrods. Same principle. There’s satisfaction, too, in concocting a cartridge uniquely yours. 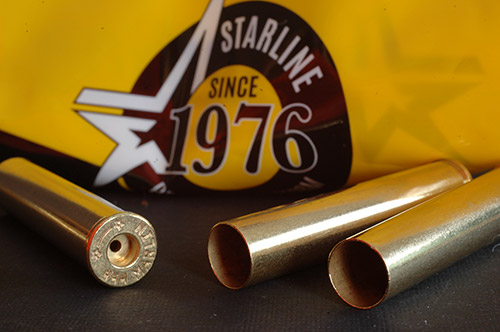 Keen to build rifles, Charles Newton was swatted repeatedly by events beyond his control. But others took up his wildcatting torch. By the 1930s J.E. Gebby, J.B. Smith, Harvey Donaldson, Grosvenor Wotkyns and John Sweaney had .22s on the .250-3000 case. A 1937 version by Gebby and Smith became the .22-250 “Varminter,” a name Gebby copyrighted. Remington picked it up in 1965.

In the 1940s Parker or “P.O.” Ackley emerged to develop a spate of “Improved” cartridges with minimum taper and sharp shoulders. Headspace of the parent case was unchanged, so factory loads could be fired to yield Improved brass. The recent book, “Wildcat Cartridges” by die-maker and gunsmithing instructor Fred Zeglin describes Ackley’s work. P.O.’s own “Handbook for Shooters & Reloaders” (vols. I and II) were published in 1962 and ‘66. He’s credited with 62 wildcats, more than 40 of them Improved cartridges. His first, the .219 Zipper Improved, arrived in 1938. He readily acknowledged contributions of Donaldson and other wildcatters: Vernon Gipson, Lyle Kilbourn, Art Mashburn, Harvey Lovell. Known for the 40-degree shoulders of many of his cartridges, Ackley wrote that for many .22 cases, “such as the .228 Ackleys, the Improved Zippers…” he liked a 28-degree shoulder. P.O. Ackley died in 1989, age 86. 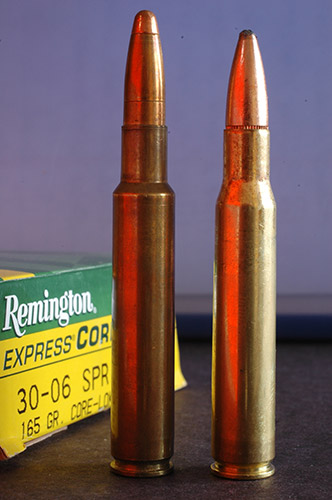 Early post-war wildcatters included Roy Weatherby, born in 1910 to a Kansas sharecropper who in 1923 opened a one-pump filling station. Then the family moved to Florida, where his father laid bricks and Roy hauled mortar. Back in Kansas, tired of menial jobs, Roy furthered his education in night classes at the University of Wichita. He married Camilla Jackson in 1936; the next year they left for California.

Roy earned the then-fat sum of $200 a month working in San Diego for the Automobile Club of Southern California. Off-hours, a lathe and a drill press from Sears helped him build custom rifles bored for his first wildcat cartridges, including the .220 Rocket, an improved Swift, in 1943. While Weatherby’s salesmanship would lift his firm’s fortunes, his wildcat ammo owed much to wildcatter R.W. Miller. In 1940 Miller reshaped the .300 Hoffman, adding radiused shoulders. E. Baden Powell suggested reducing case taper. The men lacked funds to advance the PMVF (Powell Miller Venturi Freebore) and sold out in 1945 to Hollywood Tool and Die. But Miller demurred when Roy Weatherby asked him to bless his cartridges with radiused shoulders. George Fuller, a machinist who’d helped with Weatherby’s Rocket, took up the project. Soon Weatherby’s partner Bill Wittman and Texas oil baron Herb Klein would contribute cash. 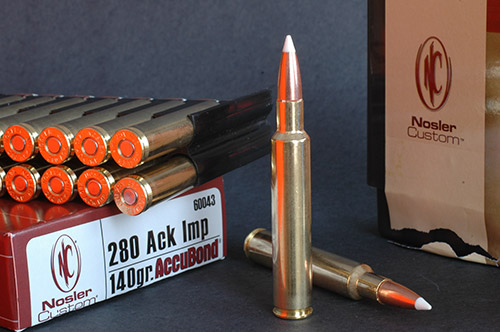 The .280 Ackley, a favorite of John Nosler, is one of few Improved rounds commercially loaded.

Forming cases by shortening the parent, turning off the belt or moving the shoulder requires much effort. During the 1950s Rocky Gibbs of Viola, Idaho, developed a stable of .30-06-based wildcat cartridges with shoulders shifted ahead. Loading for my .30 Gibbs, I must neck up an ‘06 hull with a .33 expander button, then run the case into a .30 Gibbs sizing die. A resulting false shoulder establishes headspace – a crucial step! Fire-forming finishes the shoulder and expands the lower part of the original neck to body diameter. 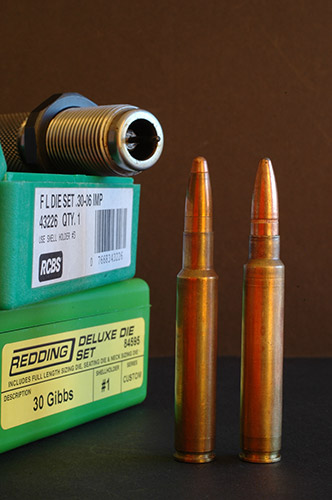 Moving the shoulder forward on the .30 Gibbs (right) hikes case capacity over that of the .30-06 A.I. 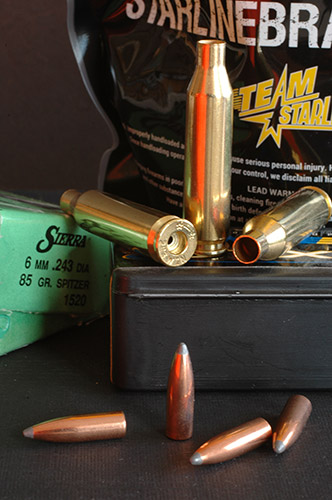 The .30 Gibbs requires more case-forming work than other wildcat ammo in my shop. The .25 Souper, and the 6.5 and .270 Redding, all of .308 lineage, headspace per their parent. Ditto the belted .30-338. I use brass from Fred Zeglin for his .411 Hawk, one of a series on the ‘06 case. John Lazzeroni reminded me that producing a wildcat from scratch is costly! “I designed my magnums that way,” he said. “To do it over, I’d base ‘em on the .404 Jeffery. Head diameter and length are nearly the same. Why re-invent?” 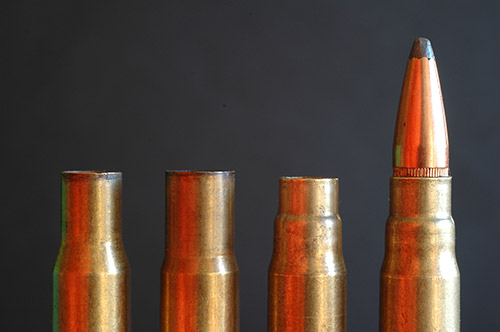 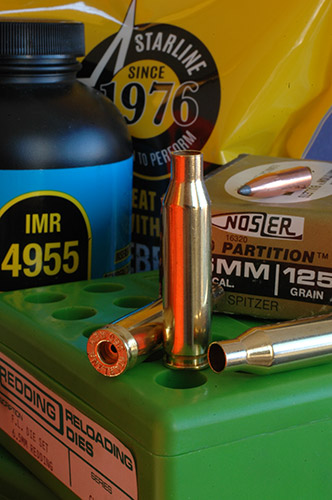 How to Make Wildcat Cartridges | Tips for Loading Wildcat Ammo

Whatever your wildcat ammo project, use new brass, not hulls fatigued by firing! Starline, renowned for its high-quality brass, offers a wide variety of rifle and handgun cases – flawless, finely formed and concentric, with surgically clean primer pockets. You needn’t fret about incipient cracks in fired hulls. You needn’t scrub or anneal. And you’re assured each case has the same capacity as the next. When you form wildcats from Starline brass, you’ll get maximum case life, and wring all the accuracy your rifle can offer. 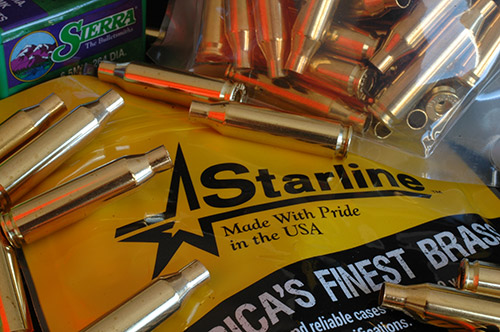 Before necking up or down, apply case lube by rolling the case, then pressing it, mouth down, on a generously lubricated pad. Yes, dry graphite excels inside the neck, as excess does not affect powder. If the case drags over the expander button, add lube inside. If shoulder dents appear, use less lube outside.

Check length on resized cases; changes in neck diameter affect it. A case too long can jam against the chamber mouth, pinching the bullet as you lock the bolt. Because the mouth can’t move to release the bullet, pressures can spike. Trimming a bit short does no harm and affords more shots between trims.

Shortening a case or reducing neck diameter yields thick necks. So does repeated firing, as brass flows forward. Thick brass must be inside- or outside-turned for easy chambering and bullet release. After turning, you’ll chamfer case mouths to ease bullet seating.

Before priming, wipe lube from hulls. Discard any in which primers don’t seat evenly and firmly.

Lacking published loads for your wildcat cartridge, look to same-caliber cases with similar capacities to get a feel for appropriate powders. With from-scratch rounds, increase charges slowly from 10 percent below those you hope to reach. Hard extraction, bright ejector marks and flat or loose primers signal disturbingly high pressure! For a more reliable sign, mike the case head. Expansion over .0005 is too much. For longer case life, consider more conservative limits: “any measurable expansion” (Vernon Speer) to .0002 (Ken Waters) to .0004 (Denton Bramwell). 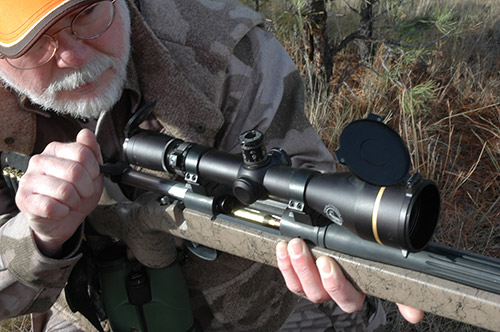 Bullet seating depth affects accuracy and pressure. I start hunting loads .1 off the lands, but many shooters prefer less jump. You should get fine accuracy with modest jump and minimum throat diameter.

I neck-size only when loading for only one rifle, setting the sizing die a dime’s-width short of the shell-holder. Result: snug chamber fit and less “working” of the brass, shot to shot. Longer case life!

Label batches of handloads immediately and indelibly. I use MTM boxes to avoid spills, mix-ups.

At the top of his game, John D. Rockefeller held 2 percent of the nation’s wealth – $340 billion in today’s dollars! He didn’t earn that wildcatting, and neither will you. On the other hand, you’ll have fun. Maybe as much as John D.

Starline has recently added a line of new basic cases to their growing line of rifle brass. These basic cases are not formed or annealed, and have no caliber designation on the headstamp. They will need to be annealed prior to forming and possibly neck annealed after forming, depending on how far they are necked down. Keep in mind when forming basic cases, the walls will get thicker when formed down, and the case will also get longer.

These basic cases can serve as a great place to start for loading many Wildcat cartridges. Basic cases available now from Starline include .223 Basic, Grendel Basic and 6.8 Basic.

Starline’s .223 Basic brass can work great for most .223 Remington based wildcat cartridges. Wall thickness at the mouth of this brass is approximately .009", which is the same as their .223 brass prior to forming. Length is approximately 1.800".

Starline’s 6.8 Basic brass can work for most 6.8 SPC based wildcats. Wall thickness at the mouth of this brass is approximately .009", which is the same as their 6.8 SPC brass prior to forming. Length is approximately 1.720".