Even after his passing, my father still finds ways to show me how much I have yet to learn in the reloading game.  It was the first thought that crossed my mind when I found one of his old reloading presses lying among the chaos that was his downstairs workbench.  However, it did not always look that way.  When he used it, the space was meticulous. Every item was set in its place for a specific and sometimes a peculiar reason.  The engineer in him laid out every single inch of his table so he could maximize reliability and efficiency.

But over time, entropy took the workbench from a hub for reloading and leatherwork to a place of storage, partly because we did not have the time to do any reloading and partly because as my father aged, his health issues prevented him from doing the things he loved.  Piles of tools, reloading equipment, archery, and fly-fishing goods had filled the space with no discernable sign of organization.  And since he could not make it down the stairs to see the mess and holler about it, the chaos continued for years.  But that never stopped him from having long discussions with my older brother, cousin, and me about what his favorite calibers were to shoot and reload, equipment he used, and tips he had for us.  And his memory was as sharp as a tack.  If tested, he could probably tell you specific load data from almost any book and could tell you every single tool he had in his possession.

So, it was a surprise to us when we began to clean up some things by his workbench and had unearthed such an unusual piece of reloading antiquity: a Herter’s Super Model 9 two-stage reloading press. This press was something we had never seen before and oddly enough, my father never spoke of.  I can recall him mentioning he had at least two presses on his workbench. One was a RCBS Rock Chucker (which he often used) and the other was a Lee Pro 1000 progressive press set up to handle 41 Remington Magnum.  It almost seemed like the Herter’s press was an afterthought on his reloading bench.  It was left on the bottom shelf, out of sight, out of reach, and out of mind.

Maybe the press was no longer functional?  There was obviously a great deal of rust on the steel parts and voids in the paint coverage on the base. But after a quick inspection, it was evident that everything indexed smoothly with no grinding or hang up.  In fact, it was so smooth that one could question why this little machine was relegated to the dark recesses of the basement.  What had it done to deserve such a dishonorable sendoff?

Intrigued with the design of the Model 9, it was decided that the press could be salvaged from an untimely demise.  So, it was off to the internet to find out as much as possible about the Super Model 9.  As it would turn out, not much.  There are but only a handful of people who have seen one and even fewer that own one.  However, the consensus is that the press was manufactured for only two years, from 1952-1953, and it was the first press offered by Herter’s.  And, while unconfirmed, there may have been a connection between Herter’s press designs and the Dunbar Glass Corporation.  There is certainly an uncanny resemblance between a Super Model 9 and a Dunbar H-press.  Both presses are roughly the same size and weight, accept standard 7/8”-14 threaded dies, and have a similar priming stage.  But they also have some nuanced differences.  For example, the hinged cam arms on the Herter’s press are split into two separate upper and lower arms, while the Dunbar press has only solid arms.

Primed with about as much information as possible, the decision to restore the Model 9 seemed obvious, not only because it had the potential to be a fun piece of reloading equipment but also sentimentally because my father and the press shared the same birth year.  Furthermore, it would be solve the mystery of what compelled my father to keep such a rust bucket if it was not a mainstay on his benchtop. 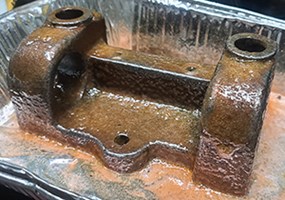 The first step in the restoration was to fully disassemble the press.  After snapping a few reference photos of the parts, the Model 9 was ready for a takedown. Disassembling a Herter’s Super Model 9 press is a thing of beauty.  There is something to be said about how simple yet elegant the design is.  With about three tools, everything could be taken apart with ease.  No springs flying off.  No set screws to worry about.  Nothing a set of mechanics tools and a pair of needle-nose pliers could not handle.  Once disassembled, the base of the press took a bath in CitriStrip while the metal parts were degreased and dropped into Evapo-rust solution.  After a bit of scrubbing with a wire brush and elbow grease, the parts were free of rust and the base was ready for a repaint.

In between paint cycles, the steel parts were polished with 400-grit sandpaper and some Scotch-Brite.  Everything came to a nice shine and to my surprise, my dad left behind a little clue about the press.  After scrubbing the RCBS shell holder H ram adapters, out popped an RCBS number six holder from their snap rings, which are used for reloading .38/.357.  My father’s favorite pistol caliber.

The remaining work on the press was straightforward and before long, the press was near ready to come back together.  However, there was one touch that needed to be addressed before reassembly. Something had to be done to resolve the matter of the tacky looking black plastic handle.  There was no way that thing was going to go back on.  So, using a piece of hardwood and a lathe, a circular handle was turned to fit onto the throwing arm.  Once complete, it was treated with some stain and water-based polyurethane for a protective hard finish.  It was time for reassembly.

After a bit of light greasing and careful fitting, the press was ready to go for a test drive.  For its inaugural run, it was set up to handle Starline 41 special cases using two RCBS dies along with a pair of number thirty RCBS shell holders.  For powder drop, a case activated Hornady Powder measure was dialed in to drop 9.5 grains of Unique Powder. 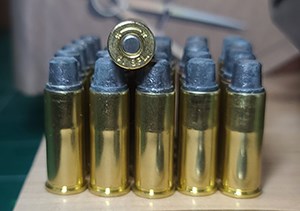 And finally, a Lee 41 Remington Magnum Seater die was cut to a shorter length in order to seat the bullets and crimp the shorter cases. I grabbed the newly finished handle, indexed the arm downward, and felt a big smile grow on my face.  The press moved smoothly, quietly, and had tons of leverage on the Starline brass.  And with every pull of the handle, I thought about how my dad used the press before me.  Another smile, this time bittersweet, grew.  I could see why my father had kept the Model 9 hidden on the bottom shelf of his bench.  He wanted it to be out of sight from his two sons who would probably have tampered with or broken it.  Out of sight.  Out of reach.  But hardly out of mind.  He loved this little press.  While Herter’s Super Model 9 may be gone from manufacture, it should hardly be forgotten.  And just like that, my dad showed me exactly how much I still have to learn from him, not only about reloading, but life as well.