They invented double action firing mechanisms for a reason. If you own one you should be able to use it effectively as it was designed to be used. You simply pull the trigger to make the firearm function. I'm not going to get into semantics about whether you should "press" the trigger or "roll" the trigger. Let's just use the common terminology. You pull it. The double action pistol trigger pull is long and sometimes heavy because the pull completes both actions of cocking and firing the handgun.

This longer, heavier pull often negatively impacts accuracy, meaning most of us shoot better with the shorter, lighter single-action pull. That's pretty obvious. Because our groups tend to open up when working through the DA pull, you can bet we regularly go to the range and insure we are shooting nice, tight groups by ignoring the DA function of our defensive handgun.

It's like high school. Really, it is. Remember back in high school when the teacher announced an impending test? You would go home and study. Well, be honest, most of us studied the stuff we all ready had down pat because it was easier. We felt smarter; as if we were actually accomplishing something. The truth is we were ignoring our weaknesses and hoping they would go away. They won't. If you want a muscle to grow, you need to exercise it.

You can brag about your nice, tight groups all you want, but if you got them by shooting only single action, when your defensive firearm also operates in a double action mode, you are cheating. And if the day ever comes that you really need that gun quickly, you will likely try to fire it double-action and your aim will be off. Maybe it will be off enough that you fail to stop the threat. Remember, the longer a fight lasts, the greater chance you have of getting hurt or killed.

By now I hope you are asking, "How can I improve my double action pistol trigger pull?" Well it starts with actually pulling the trigger in the double-action mode. Yes, dry practice. This is where I will go into semantics. Not "dry fire." There is no firing going on. In fact there should be no live ammunition anywhere in the same room when you dry practice. I cannot stress enough how important safety is during dry practice.

First things first; can you manipulate the trigger on your handgun in the double action mode? This is a serious question. I was at the police academy with a young woman who did not have the hand strength to fire her department-issued S&W pistol by pulling the trigger through the double-action mode. So, triple check that your firearm is unloaded. If it is a revolver, open the cylinder and visually inspect it. If it is a pistol, remove the magazine and inspect it, lock the slide to the rear and visually and physically inspect the chamber. Now you are ready to begin.

With the weapon pointed in a safe direction pull the trigger through the double-action mode five or six times. If you cannot, of if you have real trouble doing so, you might want to consider a product like Trigger Trainer to help build up your finger strength. We have talked about Trigger Trainer in previous issues, so I won't go into detail about it here. It works. It will help.

Now, if you have the hand strength, you get to work on multiple aspects of your gun-handling skills while you improve your DA trigger control. 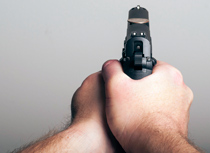 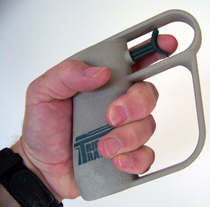 This little drill is a great opportunity for you to practice your grip, your sight picture, and your trigger control, all the while reinforcing the use of your firearm as the designer intended and more importantly as you are likely to use it in an emergency.