In a few words, gunpowder is the fuel for a load. That would include muzzle loaders as well as cartridge arms. The one exception is air guns which use compressed air as the power source and that is accomplished in various ways. I imagine that there are various experiments to find something better than gunpowder but to my knowledge, that hasn’t been accomplished yet. No one knows for sure exactly when black powder was first invented, though the Chinese are generally credited with its invention. For a long time it was used for fireworks and similar uses. There are records that indicate it was used for guns sometime in the 13th century, though an exact date is unknown.

France shocked the world by introducing a usable smokeless powder in 1886 for their 8 mm Lebel. In many ways, it was light years ahead of black powder. It produced more velocity, which increased the range and power of a weapon. In addition, it produced a lot less smoke so a shooter’s position wasn’t advertised as it would be using black powder. It was cleaner, reducing the amount of time necessary to clean and maintain a weapon. Small rounds could be utilized, saving space and allowing soldiers to carry more ammo.

Velocity immediately increased from 500 to 700 FPS over the conventional rounds of the day. For instance, an 11 mm Gras launched a 370 grain bullet in the neighborhood of 1,400 FPS while the original Lebel round pushed a 230 grain bullet out at over 2,000 FPS. Although the militaries of a number of countries were slow and backward, they immediately saw the advantages of this new propellant. The French tried to keep it a secret but of course, it got out. By 1888, Germany had their own 8 mm smokeless powder rifle. By today’s standards, early smokeless powder was crude and dirty, but it improved over time.

When smokeless powder was put into production, it became evident that the designs of guns had to be changed since smokeless powder burns at higher pressures. For example, the French were using a Gras rifle in 11 mm caliber. The only lockup was the bolt handle. While this was okay for black powder, it was not adequate for the newer propellant.

The Gras was modified with locking lugs at the front of the bolt. While a couple of older designs were strengthened, most smokeless guns used front locking lugs. Some guns, such as the Mauser model 98, had a safety lug. Some guns had vents in the bolt or receiver, which protected the shooter in the event of a case rupture. In addition, the steels used to manufacture guns were improved. The early steel was soft and would stretch and wear under the stress that smokeless powder produces. The early barrels would not handle jacketed bullets very well and the rifling would wash out if too many rounds were shot through them.

The two main ingredients in smokeless powder are nitrocellulose and nitroglycerine. The double base type includes both ingredients while the single base type lacks nitroglycerine. The French introduced smokeless powder that was practical in 1886 for the 8 X 50 Lebel known as Poudre B. They experimented with it for many years but until 1886, the powders were too unstable to use in small arms.

There are several advantages of smokeless powder over black powder. First, smokeless powder is about three times as powerful as black powder, which extends its range and allows for small caliber ammo. As a result, a soldier can carry more rounds and does not need to worry much about smoke giving his position away.

Over the years, powder came in many types and shapes including Cordite, which looks like spaghetti. Today, there are three basic types; extruded, ball and flake. There are various chemicals added to regulate the burning characteristics. Modern powders have improved a lot over the years. They burn cleaner and are less temperature sensitive.

Smokeless powder should never be used in firearms designed for black powder, especially muzzle loaders. Even a small amount of smokeless powder can destroy a gun. In cartridge guns, smokeless can be used in some instances as long as you are careful. Some of the 19th century guns are well built, so smokeless loads recommended by a reliable source can be used.

One of my favorite smokeless powders for rifles is AA-5744. It gives similar results as black powder, but with a lot less powder. I have used it a lot. Used properly, it gives great results. Trail Boss is also a good substitute because it has such a low density and is consistent. There are other good powders out there, but be sure your gun is mechanically sound and the load is from a credible source.

For hundreds of years black powder was the only safe propellant. Sometime in the 1840’s there were various attempts to use a smokeless powder, but they were unstable and dangerous. For a short period of time, there were various types of semi-smokeless and brown powders, neither of which lasted very long.

Black powder has been around for hundreds of years. The three main ingredients are sulphur, saltpeter, and charcoal. Over time, the ratio has changed and today different makers use their own blends. The way they regulate burning is by grain size and a coating. Black powder is extremely easy to ignite which makes it desirable for flintlock and other arms that have crude ignition systems. 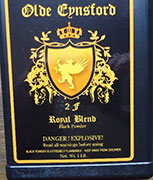 On the other hand, great care must be taken when handling black powder. Things such as static electricity can ignite it. There should never be any airspace when loading black powder in any gun. It is an explosive and will completely burn before the bullet has a chance to move causing a pressure spike. I have a 45 caliber muzzle loading rifle that was destroyed by the airspace. Black powder is rated by grain size. The smaller the grain, the faster it burns and the smaller caliber it is used for.

There are a couple of advantages to black powder that may not be obvious. Since it operates at low pressures, it is safe in any gun that is safe to fire. It doesn’t work very well in semi and full auto guns as it will gum up the works in short order. That is why semi auto guns were not practical until smokeless powder came out.

You can use black powder in manually operated guns of any type, though cleanup may not be much fun. For instance, if you use it in a 30-06, you will lose about a third of your power. However, if it is an emergency, black powder will beat a stick. You can propel a shotgun slug at about 1,000 FPS which would cost you some range but would make a nice home defense load.

The power of a firearm is measured in FT. LBS. of energy, which is the usual way of comparing one gun to another. The two things that determine energy is the weight and velocity of a bullet. It is a mathematical formula. Smokeless loads derive their power from velocity while black powder depends on bullet weight since it lacks the velocity potential of smokeless powder.

When self-contained black powder loads came out, it was discovered that bigger was better. Most military and hunting rifles use large calibers and heavy bullets and they were, and still are effective. Smaller calibers work for small game and target shooting. Black powder guns, both cartridge and front loaders, are capable of excellent accuracy.

Some self-contained black powder loads used in Africa were over the top, such as the four bore. The four bore produced more energy than virtually all of the modern magnum rifles produced today. Of course, the recoil was so severe that the shooter stood a good chance of being seriously injured along with whatever he was shooting at.

The first well known black powder substitute was Pyrodex, developed by Dan Pawlak. It came out in 1976 and is still used today. It isn’t as corrosive as black powder, but for cleaning you’ll want to treat them the same. Pyrodex acts similar to black powder in regards to power and burning rate. Its one advantage over black powder is that it is considered a propellant as opposed to an explosive. In order for Pyrodex to be efficient, it needs to be well compressed. It would not be suitable for priming a flintlock as the charge is loose.

Pyrodex is produced by Hodgdon Powder Company. It comes in various grades such as Pyro P for handgun, RS for rifles and shotguns and Select which is a little more refined for target use. Triple 7 tablets are also offered and they offer a potent load.

Both IMR and Hodgdon produce tablets, which are meant for inline muzzle loaders and are convenient to use. Normally you use either two or three tablets, depending on how much power you want. They are capable of good power and ­accuracy. With 3 tablets and a 350 grain pointed bullet, you have a potent 50 caliber rifle capable of 200 yard shots.

Another substitute for black powder is Clean Shot. While non corrosive, Clean Shot leaves a white residue in the gun but is fairly easy to remove. Like black powder, it produces a lot of smoke and can be used in handguns and rifles. I have had good results in cartridge guns using Clean Shot. It produces a little more velocity than black powder.

It seems like new products come out almost daily. Tablets and cubes are just a couple of the newer items offered. IMR is bringing out powders that are not temperature sensitive and resist copper fouling. There are currently about 200 different types of powders offered to the handloader. For those who like to shop, you are in luck when selecting your powder.