I will never use the term accidental discharge when talking about a firearm. That is because firearms do not fire themselves. They do not “go off.” There is a specific series of steps that must be completed in order to make firearm go from quiet to loud. If that firearm becomes loud before you intend it to become loud, you are negligent. 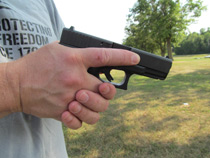 In the interest of discussing personal responsibility, I will explain the circumstances of my one negligent discharge; just so you know I speak from experience and am not talking down to anyone.

My Own Reckless Discharge

Way back in 1992 I was preparing to leave my house in South Dakota. I strapped on the holster and removed my Browning Hi-Power from the cabinet. The pistol was unloaded so I inserted a magazine and racked the slide. Then, for some reason known only to the Almighty, I decided to lower the hammer by holding the hammer and pulling the trigger! What occurred is what my kids would today call an “epic fail.” The round went down through the corner of the mattress, through the carpet and into the bedroom floor. I cleared the weapon, dropped it on the bed and raced downstairs to the living room to inspect the ceiling. I figured if I needed to apply some spackle it would be dry before my wife got home from work. Luckily there was no hole in the ceiling. Also luckily I did not have the gun pointed at my leg.

The results of a negligent discharge can be anything from embarrassing to horrific. We are talking about the potential for a dead child, here. I own that round. I take full responsibility for my failure that day and it will never happen again.

So let’s take a look at why it happened. What did I do to cause a reckless discharge? In short, the discharge occurred because of unnecessary gun handling. I was touching something and doing something I didn’t need to be doing. That pistol should have been carried cocked and locked. I intentionally pulled the trigger. I did exactly what needed to be done to make that gun fire and, guess what? The gun worked. The firing pin hit the primer, the primer lit the powder, and the gasses shot the projectile out of the muzzle.

Rules to Avoid a Negligent Discharge

So then, the first rule should be never to handle the firearm more than you need to. Load it. Make it ready. Holster it and leave it alone until you are faced with an emergency.

The second rule is one of the four cardinal rules of gun safety: Never put your finger on the trigger until you have made a decision to fire. This does not mean you should put your finger on the trigger “when your sights are on the target.” What if you are holding a person at gunpoint? The bad guy has his hands in the air and is giving up. But because he is a lying dirtbag, you wisely keep him covered in case he suddenly thinks he can get the drop on you and become a deadly threat again. So you have him covered. He is giving up and you get startled. Your sympathetic reflex could cause you to jerk the trigger, resulting in a negligent discharge. Now you just shot someone who was trying to surrender. That puts you in a world of trouble.

Some of you who know the other cardinal rules might say, “Well, you shouldn’t have had your gun pointed at him.” I disagree. You are not supposed to point your gun at anything you are not willing to destroy. You are willing to destroy this particular dirtbag, it’s just that right then and there you did not have a legally justifiable reason to do so. Go ahead, point your gun at the dirtbag. The gun will not recklessly discharge if your finger is not on the trigger.

Now we are to the point of discussing how we ensure that we always keep our finger off the trigger until we have made a conscious decision to fire. In a word: Training.

You can train yourself to do it. But you have to be vigilant and you have to train correctly. I’m counting on you to be a responsible gun owner so let us agree here that you will do both.

Learning to keep your finger off the trigger will all but eliminate the chances of a negligent discharge. In fact, I believe having a finger on the trigger is really the only way a properly functioning and well-maintained firearm will discharge. So, let’s start.

Keeping your finger off the trigger, take your properly functioning and well-maintained firearm from it’s holster and, keeping the pistol pointed in a safe direction, press the magazine release and remove the magazine. Set the magazine aside. Now grasping over the top of the slide with all four fingers (keeping your fingers clear of the of the ejection port) retract the slide briskly and fully to the rear and watch the chambered round fall to the ground. Lock the slide to the rear and visually and physically inspect the chamber to insure it is empty. Pick up your live round and move the loaded magazine and the live round out of the room in which you will be training. There should be no live ammo ANYWHERE in the room in which you will conduct your dry practice.

If you use a revolver; same drill. Depress the cylinder latch and dump the rounds. Get them out of the room.

Now, return your unloaded firearm to the holster and let’s practice your draw. 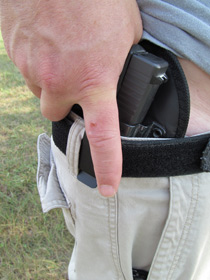 Now you have your gun out, your sights are on the threat. Notice there is still no need to put your finger on the trigger. Once you decide to shoot. Move your finger to the trigger and press it all the way to the rear.

So that covers negligent discharges when drawing your firearm. Follow all those rules and you will never have a reckless discharge while drawing. What about other times?

After you shoot and the threat is stopped it is time to top off. Raise your finger up to the ejection port and conduct a reload.

Typically, a negligent discharge is caused (it does not simply occur, it is caused) during what some folks call “administrative” gun handling. Some instructors say there is no such thing as “administrative” gun handling and all handling should be tactical. But you know as well as I do that gun owners load and unload their guns and regularly put on and take off a holstered gun. So, what to do?

First rule, keep your finger off the trigger. There is only one time you are ever required to touch the trigger when you are not in a deadly force situation. Can you name it? Some pistols, most notably the Glock, require that you pull the trigger in order to field strip the gun. I hate that. But Gaston Glock did not ask me when he designed the pistol. So, unless you are going to shoot someone or take your gun apart, the rule is simple. Don’t touch the trigger.

Here is an example. You come home from a long day and decide to remove your defensive firearm for the evening. Undo your belt, slide your holster with the gun still in it off the belt and place both items AS A UNIT into your gun safe. In the morning, dress yourself the way your mother taught you and slide the holster with the gun in it back onto your belt. Very simple.

How about on training day and the cleaning that follows. Chances are good that you are going to want to remove your expensive hollow points from the pistol and replace them with FMJ training ammo. Put your gun on just as described above. Then with your strong hand reach down and depress the magazine release button WHILE THE GUN IS STILL IN THE HOLSTER. Remove the magazine with your strong hand, leaving the gun in your holster. Strip out the rounds from the magazine and replace them with training ammo. Reinsert the magazine. Reach over with your weak hand to hold the pistol in place and slap the magazine firmly to seat it. Now leave it alone. Yes, you still have a hollow-point in the chamber. So what? Use it for your first training round.

Now training is over and you want to clean your pistol. This is the most dangerous time for a negligent discharge. With your pistol in the holster remove the magazine just as described in the paragraph above and set that magazine aside. Now, as described higher above, move to a safe location and come to what we describe as Position No. 3 of the draw (some folks call this Position No. 2) and retract the slide fully and briskly. Allow the live round to fall on the floor. Keeping the pistol pointed in a safe direction physically and visually inspect the chamber to see that it is clear.

Now you may conduct your field stripping.

You will notice that the only time your finger is on the trigger is when you are faced with a deadly threat. Unless of course you own a Glock and need to pull the trigger for field stripping. If you follow all the rules laid out in this article, you will never have a negligent discharge. Because, to make a gun go loud you have to pull the trigger. Don’t do that unless you are on target and ready to fire.