Ammo Reloading for Supply and Savings | Why Reload Ammo

Ammo reloading is the process of building ammunition by assembling the parts by hand. It provides shooters a way to save money, increase supply and have fun all at the same time. As the firearms industry continues to surge due to the current political climate, ammunition has become harder to find. Because of this, the popularity of reloading has greatly increased.

Ammo reloading isn’t rocket science, but it is pretty technical. It’s not something you can just decide to do without a little research first. You need to know which tools are a must and how to properly build each load. Thankfully, there is a lot of information out there to help folks begin.

There are a lot of books on reloading and I recommend flipping through a few to see which speak to you. I believe videos are even more valuable. There are a lot of videos available for purchase, but you can also find most of the information you need for free on the internet. A YouTube search on the term “reloading” returns 287,000 results. 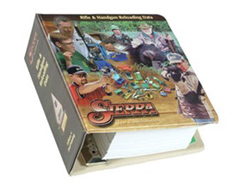 Perhaps the most important tool you can own is a reloading manual. Reloading manuals tell you all the components of the load being developed, such as how much powder to use, how much the bullet should weigh, how long the case should be, etc. They also provide tips on the entire reloading process. Most bullet and tool manufacturers, like Sierra Bullets, Hornady and Lyman, offer reloading manuals.

Once you’re educated on the process and have all your components, it’s time accumulate the tools necessary to put the ammunition together. The tools you need are a press, priming tool, dies, a powder scale and funnel, powder trickler and calipers. There are more tools you could use, but these are the basics.

There are three types of presses, single stage, turret and progressive. Single stages only hold a single die and handle just one step of the ammo reloading sequence. They are the least expensive, but are also the slowest. Turret presses hold more than one die so you can complete numerous steps with the same press but you have to manually rotate the turret. Progressive presses are the fastest because they take the ammunition through the reloading sequence. They are also the most expensive. As a beginner, you should consider a single stage or turret press.

Dies are what the press holds. They deprime the brass, resize the brass, seat the bullet and crimp it. You need a die set for each caliber you plan to reload. Powder scales are used to measure the amount of powder your load calls for. The funnel is used to take the powder from the scale pan into the case. Powder tricklers are used to replicate the amount of powder you need in each case again and again.

Getting started in ammo reloading takes a little time and money. Once you invest in basic tools and knowledge though, you’ll save money over time and mostly likely enjoy the process of loading your own.