We received this article unsolicited from one of our customers. We enjoyed reading it and wanted to share it with you.

“A foolish consistency is the hobgoblin of little minds,” Mr. Emerson wrote in his 1841 essay Self-Reliance, which speaks a truth to us today that all could use more of a healthy dose of skepticism when it comes to what you ought to believe. Our friends in Missouri already know this, of course: if you are going to make a case for some matter or the other, you have to demonstrate it to prove it so. Anything less is, more likely than not, an attempt to relieve you of your hard earned coin.

Determining foolish ideas or practices from the not so foolish is oftentimes difficult because no one can spend the necessary amount of time and money to be an expert at everything, let alone even a couple of areas, for that matter. What we instead do is look to trusted sources to separate the wheat from the chaff, so to speak, and give us the straight dope about some idea, practice, product, or service. This is why many people subscribe to Handloader magazine, or perhaps ask around at their gun club and get insight from folks in the know. And what I wanted to know, on my recent adventures into NRA Precision Pistol, also known as “Bullseye” Shooting was, I thought, very simple: how many times should I reload my 45 ACP brass for the 50 yard, slow fire portion of a tournament (known as “the long line”)?

I had no idea a can of worms could possibly be so large.

In my defense, I come to reloading by way of the simple shotshell, where everything (powder, primer, charge) is rather set in stone; I also have quite a bit of experience in metallic stuff for handguns, too. I also know that if you ask three serious reloaders the same question, you’ll probably get four different answers. The answers found during research ranged as follows:

Interestingly, I spoke to a former shooter on the Air Force team (uses twice fired brass, then dumps it into the practice bin) and a former shooter from the Army Marksmanship Unit (shot factory in the service; uses only virgin brass) and neither agreed with the other. I spoke to High Master shooters and even quizzed pistolsmiths. In addition to reloading manuals from the halcyon days of Bullseye shooting, I read forums, blogs and social media groups to glean any consistent information I could. There was little to be had, save that the best (meaning “most accurate”) sort of bullet appeared to be a 185 grain jacketed hollow point, propelled by either Bullseye, BE-86, Red Dot, Unique, Clays, Titegroup, VV310, VV320 and WST, just to name a few. Many swore by the “Marine Load,” that David Salyer and Al Dorman came up with and handed off to the Marine Corps Pistol Team some years ago. I haven’t mentioned that many people think shooting plain lead semi-wadcutter 200 grain bullets at target velocities between 750 and 800 feet per second or so is perfectly acceptable, and also accounts for many records, too.

The only bit of consensus I could glean, if any, was that whatever load you picked, it ought to be tested out of your gun in ten shot groups at 50 yards and work for the recoil profile that you can handle for either 90 or 180 shots, depending on whether you use the 45 ACP in the Centerfire portion of the match.

Not everyone has the cash to afford a Ransom Rest for testing, access to a 50 yard range, or the time and money to purchase the components and do a comprehensive study on 50 yard accuracy degradation over the life of a 45 ACP case. But, everyone wants to be as accurate as they can possibly be with the equipment they can afford. And there was some useful information that could be inferred to make a good decision: 1) the Army Marksmanship Unit uses factory rounds and doesn’t reload pistol rounds, so using virgin brass seemed a good idea as they wouldn’t do it otherwise, and 2) assuming that the average Joe wanted to shoot with the best of them, but was still on a budget, then doubling to using a single case, loaded twice, for the long line seemed incredibly reasonable, albeit conservative. It also knocks out any worry about whether or not it is the “Indian or arrow” problem that crops up when things aren’t going so well. It’s also cheap to implement, as only 30 (or 60, depending) pieces of brass are required for the 50 yard portion of a match.

Assuming you buy 1000 pieces of brass, reusing it twice for the long line, would be 2000 shots. Depending on whether you used 30 or 60 pieces per match would add up to about 65 or 32 matches, respectively. I don’t think you can purchase any shooting equipment that you need for the highest performance possible at a more reasonable price than quality brass. The peace of mind alone keeps the hobgoblins at bay, which means I can focus on shooting without foolish distractions about consistency- at that point, it will be about trusting myself to get the job done.

Of course, you know the brand I’ll be shooting in my pistol- or as I like to say to my friends at the range, “I’ll take any brass, so long as it’s Starline- I’ll shoot that stuff in anything!” 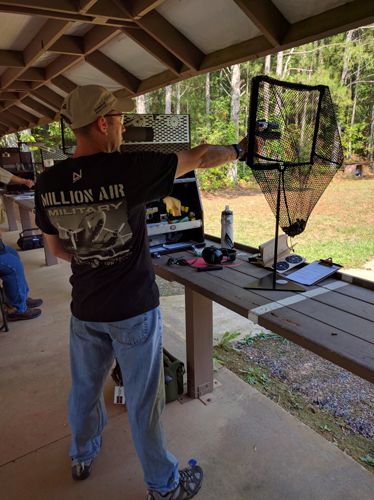