The 41 Long Colt was brought out in 1877 for the Colt Lightning model and later introduced in the New Navy and Bisley models. It was brought out as a self defense round and with the relatively blunt 200 grain bullet it was considered adequate. Many old west characters liked it due to ease of carrying. It was said that Billy the Kid favored it as he had small hands which made it easier to handle. Just for the record there is a 41 Short Colt round which is a shortened version of the long with a lighter bullet. It is very obscure and was underpowered and would qualify as one of the 3 most useless cartridges in existence. I have tested the 41 short and it is pathetic. If you shoot someone with it you better be able to whip or out run them as it will only make them angry. The original 41 Long Colt load was black powder propelling an outside lubricated bullet at about 730 feet per second producing 230 lbs of energy. Later on they used a 386 diameter inside lubricated slug at about the same velocity. Because of varying dimensions, it was not accounted very accurate. However, I have found in a solid gun with good ammo it shoots pretty decent. It did win the 1908 Palma match so I have to believe even then they knew how to wring out good accuracy from this piece. After about 1910 popularity started to wane giving way to the 38 special which was more accurate and versatile. In recoil the 41 caliber revolver feels similar to a full size 38 with the police load which means that it’s not hard on the hand. Like many of the double action revolvers of the period the trigger pull is a beast. In the single action mode it is serviceable though a bit heavy. It has fixed sights as was common in the day. They are ok and close on with factory equivalent loads in both of the revolvers shot. If they are off for you it would be a good time to learn Kentucky windage.

There are some 41 Colts out there so it’s worthwhile to develop some load data. A few years ago brass was very hard to get. The only supplier was Bertram and unfortunately the brass was expensive and of poor quality. I had a lot of problems with it from no flash holes in the primer pockets to the rim coming off when attempting to prime it. Since the maker is in Australia, it was hard to return it. The only other way to get cases was to size down a 41 magnum and cut its rim. Not only was that labor intensive but they weren’t the best cases either. Anyway, happily Starline now sells quality brass at an affordable price. The bullets were a problem but a call to N.E Molds solved that. It is the 2 diameter bullet being 386 and 401 up front. In addition, Huntington Die sells a hollow base version which shoots fine. Both bullets shot to the same point of impact at 10 yards. At 15 they shot into a silver dollar size group which I don’t consider too bad for an old gun and shooter. Both bullets are soft which without a doubt contributed to the accuracy. Even at 75 yards I was able to hit the iron pig as long as I did my part. We noticed that the gun has a split at the rear of the barrel. Continued shooting didn’t hurt the gun or the accuracy. The second specimen didn’t suffer that ailment. I also have a Colt Police Positive in 32-20 that also has a split. I guess they are getting old like me. The 41 Long Colt would not be suitable for any large game hunting as it lacks the power but would be ok for small game.

I worked up a few loads for it and here they are. They were chronographed 10 shots at 10 feet from the muzzle. A Chrony and Pact was used for these tests. If you use these loads approach the max from below. There is nothing to be gained by using max type loads and will wear out the gun faster. Since I have no control of how this data is used I take no responsibility in its use. The loads in bold print are for info only and shouldn’t be used especially in older guns. 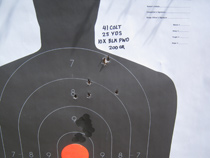 The 192 grain is hard cast as opposed to the softer 197. Overall, the 197 was slightly more accurate due to the lead upsetting in the bore. There are not a lot of bullet weights or styles available as there are in other calibers. However I don’t consider that a major problem as the 41 has limited utility. A bullet in the 190 to 200 grain range would be the most suitable as they are the ones most closely matching factory ammo. The bullet sold by Huntington is hollow based and soft which allows the base to expand upon firing. I have obtained another 41 caliber revolver from Colt with a 6” barrel that I have tested with various loads. Unlike the other one there is no split at the forcing cone and it is pretty tight. At the SHOT show I met the people who make quite a few types of ammo for hard to get and obsolete arms. I have shot their ammo in the past and always have had good results. They sent me a couple of boxes of 41 Long Colt in both black powder and smokeless loads. I chronographed and shot both for accuracy and they performed very well. At 15 yards I could shoot a small palm size group off hand which is really good for this revolver with a crude set of sights and a less than desirable trigger. I shot single action as the DA pull is just too heavy for target work.  If you are looking for hard to get ammo I would suggest you try them. For more info, you can go to http://www.tenxammo.com/ to check out their line of products.

It is a unique experience shooting old guns and the 41 Long Colt is one of the stranger American revolvers. It is definitely worth shooting as it is a part of history.