The .224 Valkyrie has a lot of potential and an interesting background. A lot of recent cartridge and rifle development has been geared to “long-range shooting.” (Of course, what is considered “long range” means different things to different shooters). As an example, the 6.5 Creedmoor was introduced in 2008, and is indeed a terrific cartridge—flat shooting, efficient, and super accurate. 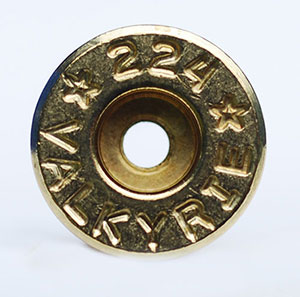 Federal spent considerable time and energy developing a smaller cartridge to duplicate (and even improve upon) the Creedmoor’s impressive ballistics. The new round, the .224 Valkyrie has had a few starts and fits in its birthing, but it finally seems to be flying high, like its namesake. 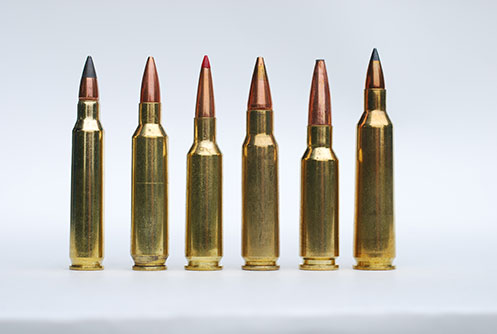 The Valkyrie and the Creedmoor have several similar features of case design that make them both great cartridges. These features include a longer neck, a shoulder that’s pushed back a bit, and rifle chambers with longer throats. These features allow long, skinny bullets to be seated out further, so they will not intrude into precious powder space. Plus, Valkyrie chamber specs are carefully matched in rifle chambers to enhance accuracy potential.

Some writers have described the Valkyrie as a “scaled down Creedmoor.” However, the Valkyrie case is derived from a slightly shortened 6.8 SPC case, necked-down to .22 caliber. The new round’s maximum case length is 1.600 inches, as compared to the 6.8’s case length of 1.686 inches. The rim diameter of both rounds is .442 inch. However, the Valkyrie’s shoulder angle is 30o, while the 6.8’s is 23o. And, since the Valkyrie’s maximum overall cartridge length is 2.26 inches, it fits comfortably in the ubiquitous AR-15 platform—a major plus.

The .224 Valkyrie has spawned a crop of new high-tech bullets that add significantly to the potential of the cartridge, to help it achieve its lofty goals. Hornady, Sierra, Berger, Nosler, and probably other companies offer long, heavy-for-caliber bullets with high ballistic coefficients that buck the wind and are especially designed for long-range accuracy. 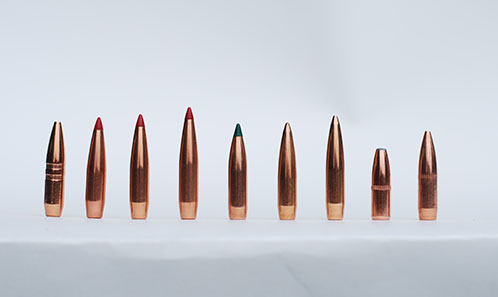 I have been an early, yet trepidant, fan of the .224 Valkyrie, and have tested several rifles with many handloads. I have used Starline cases in numerous cartridges for years and have been impressed with their performance and uniformity. So, I was anxious to try out the new Starline brass in the .224.

The maximum length of the Valkyrie case is listed by SAAMI as 1.600 inches. The trim length, of course, is nominally .010 inch less than that, so cases ready to go should be about 1.590 inches in length. For this report, I first did some metrics on a sample of 50 new Starline .224 Valkyrie cases. The results are shown below.

I selected 50 new, unfired Starline .224 Valkyrie cases, and measured their lengths with a digital caliber to 0.0005 inch, weights with an RCBS Charge Master 1500 electronic scale to 0.1 grain, and neck-wall thickness with a Hornady digital caliper to .0005 inch.

(Above) Case weights were uniform, and similar capacities contribute to consistent ballistics. 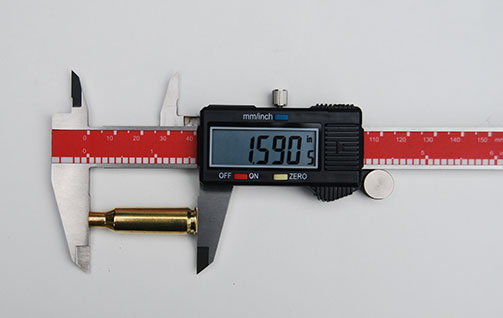 (Above) The new Starline .224 Valkyrie cases were checked for length with a digital caliper, and were right at the “trim” length, ready for loading.

Uniform case necks are important, and the Starline cases did well in this measurement too. I measured the neck thickness at five points around the neck with an RCBS ball micrometer and averaged the results for each case for its “measurement.” The resulting average neck thickness of all 50 cases was .0139 inch, with an extreme spread of .0014 inch. One case had an ES of 0.000 – no variation.

(Above) Case-neck thickness was checked with a ball micrometer and found little variance.

So, it’s obvious that these cases are ready to go with minimal, but necessary, preparation. This “prep” is carefully described on a card supplied by Starline in their packages. New Starline cases are treated with a corrosion inhibitor. This substance is a mild lubricant that should be removed from the inside of the case necks before loading. Starline suggests doing this by either resizing (with regular case lube on the outside of the case) or running the case neck over the expander ball. This removes the lube and rounds out any dings that can occur in bulk-packed brass. Then chamfer the inside of the case mouth, and they’re ready to load.

I prepped a bunch of new Starline cases, and prepared 28 different handloads, 14 for each rifle, using a wide variety of powders and bullets. I used RCBS dies, but sets are available from Hornady and Redding, as well. The correct shellholder is the same as the 6.8 SPC. 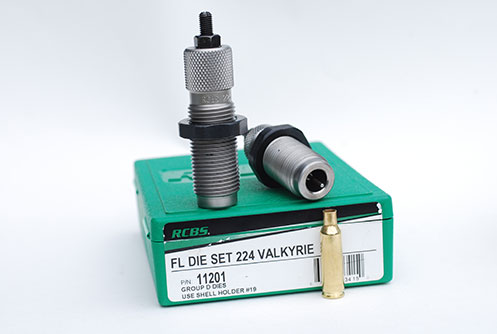 (Above) Test handloads were prepared with RCBS dies.

I shot three, five-shot groups with each load in each rifle from my indoor shooting building. I concentrated mostly on the heavier bullets, as per Federal’s model. I used primers common to reloaders of similar sized cases, i.e., Federal No. 205, CCI-41, and Winchester Small Rifle. The extremely uniform primer pockets of the Starline cases made priming a breeze—no crushed pellets, or “goosey-loosey” pockets here.

My power charges were like those that have performed well for me in other .224 Valkyrie rifles. I tried a slew of powders, but here’s the bottom line—Hodgdon’s CFE 223 was the hands down winner in both rifles. It meters smoothly, it is superbly accurate, and it limits jacket fouling. But IMR-8208XBR did very well with varmint-weight bullets. Significantly, after firing and resizing, the Starline cases lengthened only a smidgen—another bonus. I never had to trim one over the course of testing, something I can’t say about other brands of .224 Valkyrie cases I’ve used. 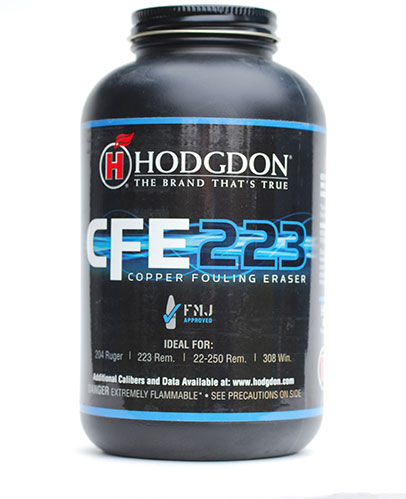 As I see it, Federal’s plan for the .224 Valkyrie seems to be geared to that long-range shooting we’ve discussed, and factory ammo reflects that. Federal Premium’s Valkyrie ammo is stoked with Sierra’s sleek, new 90-grain MatchKing BTHP, and the Fusion line has a 90-grain Fusion soft point meant, presumably, for deer hunting. A very economical American Eagle load with a 75-grain FMJ bullet is available for “blasting” ammo, and the varmint hunter is covered with a Nosler 60-grain Ballistic Tip load. In addition, Hornady has its exceptional new ELD Match bullet in an 88-grain version, both in loaded ammo and as a component.

I have tested three .224 Valkyrie rifles, and have been impressed with velocities of heavy-bullet loads, although accuracy can vary a lot. For this review, I “borrowed” two additional rifles that are prototypes from a major American manufacturer. Both are similar bolt actions and have 22-inch barrels. While the standard twist for the Valkyrie is 7 inches, both test rifles have 6.5-inch twists to see if a little extra spin improves accuracy.

The rifles differ slightly in throating. “Rifle #1” has a standard SAAMI-spec throat, but the throat on “Rifle #2” is cut a little shorter so that it provides a .010-inch bullet jump for the Sierra 90-grain MK factory ammo. In my testing, both rifles were usually accurate with 88- and 90-grain handloads, but each was somewhat sporadic. (I fully admit that shooter error is a potential factor.)  Reports of similar results here and there have been noted in the online grapevine.

Okay, how about some results? These are all shown in Table 2. The average accuracy of all loads in Rifle #1 was .82 inch, and all but three loads averaged under an inch. The best groups were turned in by the Barnes 70-grain TS-X BT, Nosler 60-grain Ballistic Tip and 70-grain RDF, and the Sierra 65-grain Semi Spitzer. These are excellent bullets, but these lighter bullets are a few bubbles off the .224 Valkyrie’s “heavy bullet” paradigm. The 75-, 77-, 80-, and 90-grain match bullets shot pretty well, too, and would hold up better over longer ranges.

Rifle #2 was only slightly less accurate, averaging .94 inch for all loads tested, and only five came in over an inch—still impressive performance. Again, the Sierra 65-grain SBT shot great, at .66 inch. The Sierra 77-grain Tipped MatchKing over 27.0 grains of CFE 223 registered 2,933 fps and averaged a tidy .77 inch.  But the Nolser 55- and 60-grain Ballistic Tips also shot great. The 55-grain BT clocked 3,209 fps with 26.3 grains of IMR-8208XBR and averaged .54 inch. The 60-grain BT preferred 26.0 grains of the same powder, averaging .94 inch at 3,089 fps. Interestingly, both rifles shot most loads with varmint-weight bullets pretty well. So much for “over spin” from the fast twists.

Overall, these are very respectable results for sportier-weight rifles. While they’re not geared to the long-range crowd, they are light enough to be toted over hill and dale by varmint hunters, and they’d sure be a prairie dog or coyote’s worst nightmare. Whether such an arm would crowd out the .223 or 22-250 Remington’s is a question that can be only answered in the marketplace.  The .223 is limited by powder capacity, but not the usual 7- to 9-inch twists. The 22-250 has plenty of powder capacity, but its standard 14-inch twist pretty much rules out heavy bullets. So maybe the .224 Valkyrie’s higher velocities with long, heavy bullets will carve out a unique niche in the shooting ecosystem, as there’s no denying that the new round has the potential to hold its own on the range or in the field.

The .224 Valkyrie is indeed a high-tech, purpose-designed cartridge, and the handloads I tested in Starline cases delivered excellent performance with a wide range of components. I think the round has tremendous potential, but if it is to be the be-all, end-all cartridge with heavyweight .22-caliber bullets, more moderately-priced rifles, like the bolt guns I used, need to enter the marketplace.

Uniform components are very important for accurate handloads, and Starline cases demonstrated their quality, both on the range and in their empirical measurements. They loaded smoothly and held up well over many reloads. Primer pockets were snug, but not too tight—no crushed primer pellets in these cases. Necks were of uniform thickness, and cases didn’t lengthen much at all over the testing program. Their availability will certainly contribute to the successful Flight of the Valkyrie.

Where did the Valkyrie name come from?

The development of the name of this cartridge is no less interesting that the design of the case itself. In Norse mythology, Valkyries were maidens who served the god Oden, who ruled over the realm of Asgard. Oden sent Valkyries to the battlefields to choose one half of the slain who were worthy to go in his afterlife to a magnificent palace in Asgard called Valhalla (“hall of the slain”).  (The other half went to Fólkvangr, the afterlife of the goddess Freyja.)  Valkyries rode to war on horses wearing shields and helmets; some even flew through the air. The dead in Valhalla were considered heroes and were fed lavish feasts by the Valkyries; Oden feasted there with his heroes, day after day.

“Valkyrie” means “chooser of the slain,” so we may assume that the connotation is that the .224 Valkyrie cartridge is going to go forth to a “battlefield,” and “choose the dead” with its accuracy and long-range power.

Note from the author, Steve Gash:

Serious handloaders know the importance of quality cases for accurate ammo. And for top quality handloads, they know they need top-notch cases. Starline Brass is well known for its large selection of pistol cases, and now offers over 40 rifle cases. A recent addition is the new .224 Valkyrie, developed by Federal as a low-recoil round for long-range shooting. The new brass is available from Starline’s network of dealers in pre-packaged bags of 250, 500, or 1,000 or Factory Direct online at www.starlinebrass.com. The quality of Starline brass is well known, so this is a welcome addition to our loading benches. 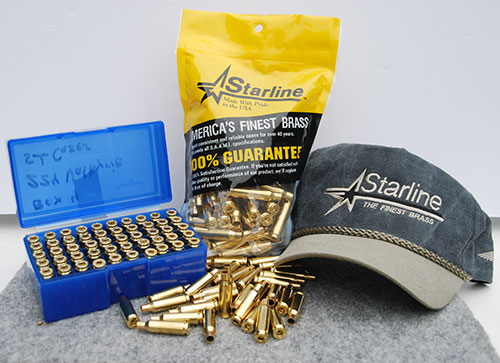 (Above) Starline brass makes cases for a host of handgun and rifle cartridges, including the new .224 Valkyrie.