The .223 Rem is one of the most popular rounds in today’s market. Developed from the .222 Remington, the .223 was designed to achieve ballistics for military use. The .223 Rem in its military form is known as the 5.56x45mm NATO. The differences between the two are the pressures that they are loaded at and the chamber of the firearms themselves.

There are so many rifles and handguns chambered in .223 being produced that it would be just about impossible to keep track of all of them. The .223 can be used for a wide range of activities including competition shooting and hunting. There is some controversy about the effectiveness of the .223 caliber on large game, but it is often used wherever it is legal.

.223 Rem bullet selection is endless; anything from 35 to 100 grains is available. There are different types of bullets depending on the desired purpose. Most shooters own a AR-type platform and are satisfied with a 55 or 62 grain military-style bullet. They are inexpensive and accurate enough to bust a target. For hunters, Sierra Bullets offers a 65 grain SBT GameKing that is very effective.

There is also a wide selection of .223 dies available. I would recommend small base dies if you have a semi-auto rifle or if you are loading for multiple rifles. It will not shorten the brass life enough to worry about.

There are two types of .223 brass - the military 5.56x45mm and the commercial .223 casings. The main difference regarding reloading is that the military 5.56x45mm has primer pocket crimps. They are installed to make the ammo more durable and able to stand up to all semi and auto weapons. Some .223 rifles are hard on ammo, which is why the crimp is used. When reloading the military 5.56, the crimp must be removed to properly seat the primer. If excess pressure is used for the seating operation, the primer may be damaged, resulting in poor performance. The crimp can be removed but that is an extra step. I don’t load large amounts of any ammo, so I use a reamer to remove the crimp. It isn’t the fastest way but it works and once that operation is done they are like commercial .223 cases.

If you are handloading .223 Rem for competition or hunting, or another type of shooting that requires accuracy and reliability, good brass is recommended. Recently, Starline introduced the .223 case to provide handloaders with a top-quality case that isn’t overpriced. I have used and written about a lot about Starline products and have never been disappointed in their quality. I don’t shoot competition, but as a hunter, I am well aware of how important quality brass is.

There are several ways to measure the quality of brass. I weighed a dozen Starline .223 cases and they varied from 102.8 to 101.5, a difference of 1.5 grains. That is consistent and should work well for the match shooter and hunter alike. The length of the Starline .223 cases went from 1.743” to 1.749”, a difference of .006 which is very consistent.

Years ago, I had a S&W M&P 15 that shot well and digested any load I put through it. It did everything that it was designed for. However, honesty compels me to state that I prefer a bolt action over a semi auto. The semi autos are good, reliable weapons but being from the old school, the bolt action suits me better.

With that in mind, I obtained a bolt action TC Compass to do some testing with Starline’s new .223 Rem brass. TC has been producing some nice guns for years, including single shot pistols and rifles. They offer various budget-friendly rifles and the ones that I have tested always do well.

As the shooting progressed, more observations were made regarding performance. Most loads were full power, but I did include a couple of reduced loads. After several firings, no Starline cases were lost for any reason. Under normal circumstances with other brass, the neck is usually the first thing to go. It splits due to becoming brittle from work hardening.

The results of my testing are included below: 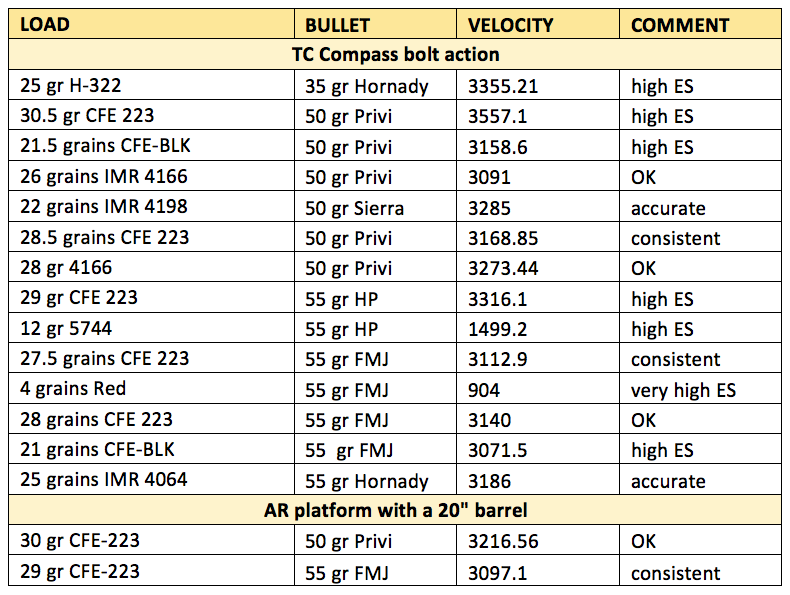 After the testing, it seemed that the TC Compass rifle was a bit fussy regarding loads. Many have high spreads that were more consistent in other firearms. Accuracy, however, did not suffer most of the time. This illustrates the need to work up loads for your rifle.

If you are serious about accuracy, I recommend choosing better quality brass such as Starline’s. It is not possible to make good ammo with sub-standard brass. Some once-fired military .223/5.56 brass comes from various countries and their quality may not be good. I have also encountered some that was too hot and others that stripped the rim, leaving the rest of the case in the chamber.

Starline has been around for over 40 years producing a full line of handgun brass as well as some obsolete cases, including the 38-40, 44-40 and the 44 Russian. Starline has good prices and quality products. However, until the last year or so, they did not produce a lot of modern bottle neck cases even though we were always asking. In 2016, however, Starline started producing some new bottle neck cases, beginning with the .308 family and now expanding to around 20 offerings including 6.5 Creedmoor, .223/5.56, and 6.8 SPC.

I have tested a lot of Starline’s bottleneck rifle cases and just like the older rounds, they have great quality at reasonable prices. More than once I have seen higher priced brass that isn’t as good. I work with a lot of ammo and do some case forming. Case forming provides a good testament to the quality of brass. Starline always stands up better than other brands through the process. In all honesty, there is other good brass available. Competition is generally good, as it forces manufactures to make good products that the consumer can afford. Starline steps up all the time. Every couple of weeks, Starline brings out a new case. For instance, they just brought out a short version of the 45 Colt that makes it easier to use real light loads. It pays to keep a watch on their site and subscribe to their e-newsletter, so you’ll be the first to know when new cases are released.