SEDALIA, MO – The Starline Brass Trail’s End Plaza has recently been dedicated on the Missouri State Fairgrounds in Sedalia, MO. The new, yet historic monument marks the location of the first large-scale effort to drive cattle from Texas to the nearest railhead for shipment to Chicago. This initial cattle drive first occurred in 1866, when many Texas ranchers banded together to drive their cattle to the Trail’s End in Sedalia, Missouri, the closest point that railroad tracks reached.

The Starline Brass Trail’s End Plaza features a steam train engine, livestock rail car, and caboose from the late 1800’s and early 1900’s. It also features authentic replicas of a windmill and water tower from that time period. In front of the monument, several bronze statues of a cowboy on a horse driving cattle represent the historic journey in 1866.

The goal of the project was to create a historic, artistic, and educational representation of the history of Sedalia, Missouri and the United States. For the final stage of the project, a trail will be built to connect the plaza to the nearby, historic Katy Trail. Members of the Starline Brass Trail’s End Plaza committee are working towards having the plaza recognized as a national landmark.

Starline is a family owned business that prides itself on producing the highest quality brass cases available. For more than 30 years, Starline’s unique manufacturing process and commitment to their team of employees has distinguished Starline from the competition. To see Starline’s full product line and order factory direct online, visit www.starlinebrass.com. 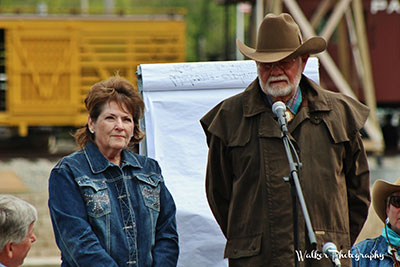