How to Purchase a Suppressor

Suppressors (also known as “silencers” or “cans”) are growing in popularity. In 2014 the number of suppressors registered by civilians buying a suppressor through the Bureau of Alcohol, Tobacco, Firearms (ATF) surpassed half a million—a 58% increase since 2012. Yet it takes some effort to buy a suppressor. Here is a summary of the steps necessary to buy a suppressor. 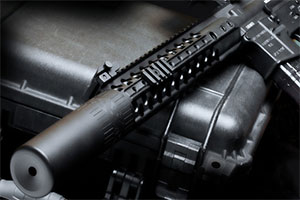 Suppressors don’t completely silence the sound of the muzzle blast. Instead, they use baffled chambers to trap the gases released when the firearm is discharged. This allows the gases to cool, reducing the sound that exits the barrel. Sounds coming from other areas of the gun, such as the hammer strike and the action cycling, are not quieted by a suppressor.

Suppressors and fully automatic machine guns both fall under the National Firearms Act (NFA) of 1934. The Act originally set forth to decrease the manufacture, sale, and transfer of weapons that Congress deemed a threat to society in the “gangster” era. In order to discourage the manufacture of these weapons, a $200 transfer tax was placed on the transfer of firearms defined by the NFA. The transfer tax or tax stamp remains the same as it did in 1934. Today, the tax is more of an inconvenience than a setback, because the value of $200 in 1934 would be the equivalent of $3,200 today.

The transfer tax is only paid once if the original owner is the only owner, or the suppressor is willed to a lawful heir and is at least 18 years of age. If the owner sells the suppressor, a new transfer fee of $200 is incurred by the person purchasing the suppressor.

Who Can Buy a Suppressor?

Suppressors can be obtained by individuals with or without a Federal Firearms License (FFL), LLCs, and trusts.

Anyone wishing to buy a suppressor must also reside in one of the 39 states that allows civilian ownership of suppressors. Suppressors are prohibited in California, Minnesota, Iowa, Illinois, New York, Vermont, Massachusetts, New Jersey, Delaware, Hawaii, and Rhode Island. Exceptions include Federal Firearms Licensees for Iowa and California.

How to Buy and Apply for a Suppressor

There are forms to fill out in duplicate, fingerprint cards to be signed by law enforcement, photos to be provided, and transfer taxes to pay. After all items have been mailed to the Bureau of Alcohol, Tobacco, and Firearms (ATF) office, approval can take up to 10 months compared to the standard gun approval process of 20 minutes. Below is a step-by-step process of how to purchase a suppressor.

Steps to Buying a Suppressor for Individuals

(LLCs and trusts require different or additional steps, noted in italics below).

SilencerCo, a Utah-based suppressor fabricator and distributor also offers an Easy Trust program for managing the purchase and transfer of items within an NFA Gun Trust. This trust eliminates the need for a Chief Law Enforcement Officer’s signature and fingerprints cards.

Buying a Suppressor with a Federal Firearms License (FFL)

Anyone wishing to manufacture, import, or deal in firearms as defined in the NFA must be properly licensed as a Class 3 Federal Firearms Licensee, have an Employer Identification Number (EIN), and pay the Special Occupational Tax (SOT). After the FFL holder obtains the proper qualifications, they follow the same procedures as an individual to purchase a suppressor.

If you are a Class 3 FLL holder, complete and submit ATF Form 5630.7, Annual Special Tax Registration and Return, along with your check or money order to the Bureau of ATFE, ATTN: NFA, P.O. Box 403269, Atlanta, Ga. 30384. After payment of the tax, you will receive an SOT stamp as evidence you have paid the required occupational tax. Obtaining a Class 3 FFL will not have any effect on current business involving non-NFA firearms.

Suppressors have many benefits, not just for hunters and shooters, but for others in the area. Using a suppressor can make an enjoyable hobby even better and the popularity of suppressors has never been higher. If you want one, make sure you are going through the proper steps to make it happen.