The .32 caliber came out just about as soon as cartridge arms were introduced. The advantage of course was their compact size and multiple shot capability. The fact that they were badly underpowered didn’t seem to hurt sales much. The idea was to have a repeating handgun for self-defense. No one wants to get shot with anything including a 32 revolver, so even though they lacked power, they still provided a deterring factor. Various companies made them in both center and rim fire.

There were a variety of .32 rim fire rounds and most of them came out in the 1860’s. Ballistics were pretty anemic and accuracy, except at close range, was abysmal. However, long range performance wasn’t considered important so those features weren’t considered reverent. For instance, the .32 revolver extra short shot a 54 grain bullet at about 650 FPS, giving about 50 FT LBS. of muzzle energy. It was also known as the .32 Protector, though I am not sure what it would protect you from. The short used an 80 grain bullet at 950 FPS, which gives 160 FT LBS. of energy, making it dangerous and potentially deadly. If you wanted “real power,” the .32 long shoots a 90 grain bullet, giving 180 FT LBS. of energy. They also made a .32 long rifle and extra-long but they were primarily rifle rounds. 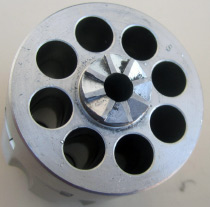 In 1875, Colt introduced the .32 Colt short and long cartridges chambered in their New Line 32 Revolvers. No other American maker chambered it, but it was used in Great Britain, known as the .320 revolver. For some reason, Colt used a .30 caliber bullet that measured .300 instead of the typical .311-.312 used by other makers of .32 revolvers. A heeled bullet was also used to some extent but wasn’t popular. Accuracy was not very good though, and was only adequate for close range. Most loads shot an 80 grain bullet in the 750 FPS range, giving around 100 FT LBS. of energy, depending on load. Like most of the other obsolete .32 revolvers, the loads are anemic. It never really caught on and lost out to the .32 Smith & Wesson cartridges. There is some confusion about interchangeability between the Smith & Wesson and the Colt rounds. To clear it up, the Colt will chamber and fire in the S&W guns, but they are actually too small. Firing a Colt in the S&W will result in a split case and very poor accuracy. Due to the very low pressures involved, it probably isn’t dangerous but I don’t advise doing it. The S&W rounds will not fit in a Colt cylinder because they have a larger diameter case and bullet. Ammo is hard to find. However, Winchester does make the short case. If you are a reloader and can find or make bullets, then you can shoot it. Of course, you need the correct dies. Whether or not it is worth the effort and cost is up to you.

The .32 S&W shorts and longs are still somewhat popular. I get inquiries about them on a regular basis. The .32 short came out in 1878 and was a hit from day one. Quite a few makers chambered the .32 short as well as the S&W break open models. Colt, H&R, Hopkins & Allen, and Iver Johnson chambered this round. Some European countries, such as Great Britain, also had guns chambered for it. Some low quality revolvers were made. If you have one, it is advisable to have it checked out prior to firing. They were designed for carrying rather than shooting. As a result, some of the parts are too soft. The term Saturday Night Special came from these types of guns. The most popular load was an 85 grain bullet at about 700 FPS giving about 90 FT LBS. of energy. At the time, it was considered adequate for self-defense. It was also used for close range small game hunting. The higher quality guns provided more accuracy. Ammo is still available and I occasionally load for it.

The .32 S&W long came out in 1903 for the First Model solid frame hand ejector model. Like the shorter round, it became popular and various makers made revolvers for it. The load was usually a 98 grain bullet at 700-750 FPS giving it up to 130 FT LBS. of energy. It was considered the minimum powered round for police work. In fact, some police forces issued them for patrol work. It was also discovered by ISU competition shooters. As a quality gun, the accuracy has always been quite good. With its accuracy and light recoil, it became popular for target and competition shooting, as well as small game hunting. I have found that semi and wad cutters are accurate in the .32 revolvers that I have shot.   There was also an obscure round known as the .32/44, which was chambered in the S&W No. 3 revolvers. It uses a longer case and will not chamber in the long. Here are a few loads for the short & long.

The .32-20 is one of the more useful .32 caliber revolver rounds. It originally came out in 1882 for the Model 73 Winchester rifle. As time passed, Colt and other manufacturers brought out revolvers for it. If you have old guns, it is a good idea to keep loads light or use black powder. At one time, hot loads were offered. However, they should be avoided in virtually all revolvers unless you have a new gun specifically made for such loads. They are better suited for rifles, such as the Model 92. With a modern firearm, different loads can be used to make it a useful self-defense or small game gun. It is really too light for deer-sized game, even though it has been used for that purpose. Ammo and loading components are readily available for this round. My DA Colt is very enjoyable to shoot. I keep the loads light to extend the life of this old gun. Cast bullets work well, shoot accurately, and are less expensive than jacketed bullets. This is true with 95% of the shooting of all 32 revolvers.

To step up power in the .32, H&R lengthened the case and called it the .32 H&R mag. Federal introduced this ammo in 1984. The case is longer and loaded to higher pressures than the older .32 revolvers. There should never be an attempt to fire these in older guns. Some of the lower quality guns may have cylinders that are bored straight through, enabling longer rounds to be chambered and potentially causing an accident. According to Buffalo Bore Ammo, energies for the H&R round range from about 150 to 365 FT LBS. I have not chronographed that load but it would take a long barrel to achieve that energy. H&R makes a revolver for this round, but I would hesitate to shoot many high pressure loads in it. Ruger makes a single action, which would get the most out of the round. It makes a good small game and self-defense load with hollow points. For reloaders, it is a fairly flexible round.

The ultimate 32 revolver, known as the 327 Federal magnum, came out in 2008. It is quite a bit more powerful than any other .32 currently loaded, including the .32 H&R. Its energy approaches many loads offered in the .357 mag. It is a very high pressure round and should never be fired in any other .32. It will fit in a .32-20, but it would destroy the older gun if it was fired. Ruger makes the .327 in single and double action and S&W makes a revolver. Due to its power, it makes a fine small game and pest round. It is accurate from distances that aren’t usually associated with .32 revolvers. Furthermore, self-defense use would be viable for this round. It does have quite a muzzle blast and creates a lot of noise with full power loads. In a lightweight revolver, recoil would be fairly substantial and might take some getting used to. I have a Ruger single action. While it is controllable with all loads, it is loud. The nice thing about this gun is that it is capable of shooting five different rounds safely. They are the .32 ACP, .32 short, .32 S&W long, .32 H&R mag, and the .327. Accuracy with the shorter rounds leave something to be desired. In a rifle, velocities increase significantly due to the lack of a flash gap and a longer barrel. I developed a shot load that is decent at 3-5 yards. The Ruger single action .327 holds eight rounds, which enhances its self-defense utility. Many people tend to overlook the single action as a self-defense gun, which in my view, is a mistake.

Like most other centerfire rounds, handloading is frequently the best way to go. With the .32 S&W, short and long ammo can sometimes be found, but it is expensive. The same is true with the .32 Colt rounds. If you have cases, cast bullets are easy to find. Once you get the dies, shooting cost are low. There is no need to use jacketed bullets. They do not offer more accuracy, they will not expand, and they are more expensive. Honesty would compel me to state that most owners of these guns have no interest in reloading, which isn’t necessarily a bad thing. Most of those guns are not meant for a lot of shooting. If you do reload for them, make sure to keep the loads light. Even a small increase could wreck a gun. The .32 mag is a step above the older rounds and would be worth some load development work, especially in a gun with a longer barrel and adjustable sights. The .327 is a wonderful cartridge to work with because it can be loaded down and various cast bullets are available. It is very flexible and accurate. If you have the .327 dies, loading all of the shorter .32’s are possible. You will need shorter belling and bullet seating dies to properly process the smaller .32 rounds. Starline makes brass for the .327 Federal, .32-20, .32 H&R, and the .32 S&W Long, as well as many other calibers. I have always found their brass to possess superior quality.

Some of the loads that I used are listed here, but this is only a partial listing. The top loads used .32 H&R mag cases. Groups were shot at 25 yards from a sandbag rest. The 71 grain FMJ is made for a .32 auto. However, I put a cannelure in it to use in the revolver rounds and it shoots well.

The .32 caliber revolvers will always have some popularity because of their small size and ease-of-carry. In addition, the .32 has been made for quite a few years. Many were made so it will be a long time before they completely dry up. Of course, as time goes by, more of the older models will disappear and will be replaced with something more modern. My guess is small semi-auto guns in various small calibers will replace them. The .32 H&R mag and the .327 Federal mag will be around for some time to come. They are useful and have enough power for small game and pest hunting. Accuracy is good, and some loads are good for self-defense. As long as there is a demand for them, guns and ammo should be available.